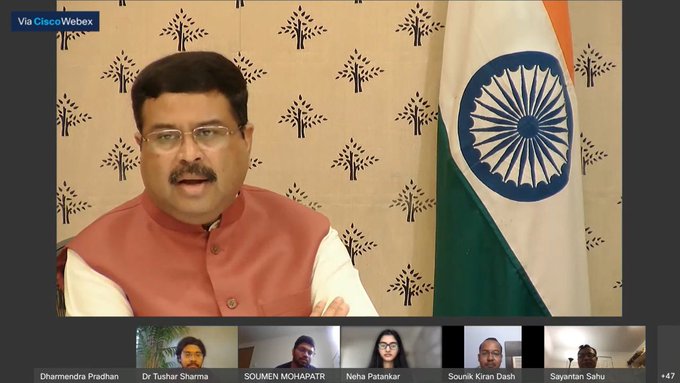 Come, Innovate in India, Petroleum Minister Dharmendra Pradhan appeals to Indian students from across the globe

Nnew Delhi: Minister of Petroleum and Natural Gas & Steel Dharmendra Pradhan has appealed to the Indian students from various top global universities to come and innovate in India, to explore the emerging opportunities. He was interacting with a vibrant group of young overseas Indian scholars, students and friends, yesterday on last-mile energy access in India. The e-meet was organised by Lead India group of Princeton University, Think India Purdue, Develop Empower & Synergize India group at University of Maryland.

Articulating India’s energy vision, Shri Pradhan said, “Hon’ble Prime Minister Modi has envisioned a clear roadmap for India’s energy future which rests on five key enablers of energy availability and accessibility for all, energy affordability to the poorest of the poor, efficiency in energy use, energy sustainability for combating climate change as a responsible global citizen and energy security for mitigating global uncertainties.”

Speaking about Pradhan Mantri Ujjwala Yojana, Minister Pradhan said, “We introduced the Pradhan Mantri Ujjwala Yojana(PMUY) scheme, in 2016. Its objective is to provide LPG cooking gas connections, free of cost to 80 million poor households. I am happy to inform you that we could achieve the target of 80 million customers well ahead of schedule. With this, LPG connections are now available to 98% of the households in India, up from just about 56% in the year 2014.”

About self-reliance in oil and gas sector, Shri Pradhan said, “PM Modi has set a target for reduction of 10 percent in energy import dependency by 2022. In this regard, the government has taken several policy as well as administrative measures to augment domestic oil and gas production and reduce dependency on imports for meeting the energy requirements of the country.”

He also talked about India’s energy diplomacy and said, “India has made its presence felt in the global energy map. India under leadership of PM Modi is leading the voice of consuming countries demanding for reasonable and affordable price of energy. We are engaging with OPEC, IEA, IEF and all other major voices in the world energy discussions. India has engaged with the US, Russia, Saudi Arabia, the UAE and all major energy producers, under a policy of diversification of supply sources.”

Speaking about India’s transition to gas-based economy, he said, “India is set to emerge as one of the primary drivers of growth in gas demand in Asia, despite the pressing Covid-19 challenges. Today, share of natural gas in India’s energy mix is about 6.3%. We have taken an ambitious target to increase the share of natural gas to 15% by 2030.”

On the current pandemic, Shri Pradhan said, “We are in the midst of an outbreak of the Covid-19 pandemic that challenges the fundamental assumptions of our lives. While the immediate economic impact may slow us down, we are presented with an opportunity to pause, rethink, and redesign.”

Dwelling upon the economic package announced during the pandemic, he said, “Prime Minister Modi has announced a massive stimulus package of $ 265 billion – accounting for 10% of India’s GDP, to deal with the impact of the Covid-19 pandemic. Major reforms were announced for a self-reliant India that seek to convert Covid-19 challenges into an opportunity, and for becoming global manufacturing hub of the 21st century. Energy infrastructure is an integral component of these reforms.”

Apple updates coding programs and resources for educators and students