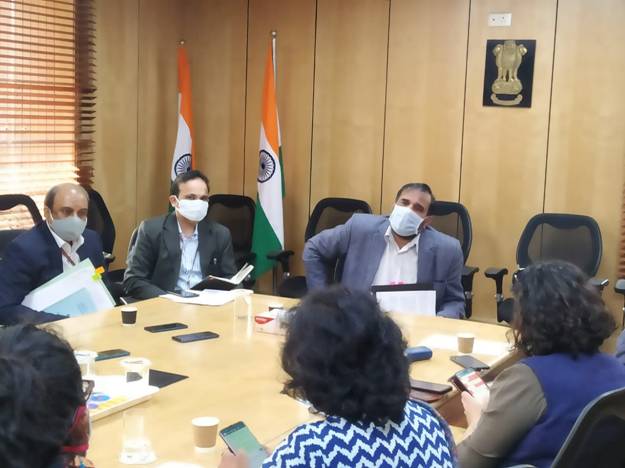 New Delhi: Commerce Secretary, Ministry of Commerce and Industry, Dr Anup Wadhawan today said that the Budget for 2021-22 extensively and comprehensively envisages several initiatives and areas of focus, aimed at enhancing India’s overall competitiveness and manufacturing capacities, which would enable growth, diversification and technological enhancement of India’s exports. These cover both ease of doing business in the area of approvals and procedures, and the physical environment for investment, targeting a plug and play eco-system for investors.

Briefing the media on the Budget 2021-22 initiatives, he said that one primary area of focus is the creation of a robust infrastructure, logistics and utilities environment for the manufacturing sector. Some of these measures include a scheme for Mega Investment Textiles Parks (MITRA), which will create world class infrastructure with plug and play facilities to enable the creation of global champions in the sector, benefitting from economies of scale and agglomeration. Seven Textile Parks will be established over 3 years.  He said that further, steps like substantial investments in the development of modern fishing harbours and fish landing centres will be made in five major fishing harbours at Kochi, Chennai, Visakhapatnam, Paradip, and Petuaghat, along with a multipurpose Seaweed Park in Tamil Nadu, are proposed. These measures are expected to boost exports from the textiles and marine sector.

Dr Wadhawan said that for the promotion of exports from the agriculture sector, the “Operation Green” scheme of Ministry of Food Processing Industry, which is presently limited to onion, potatoes and tomatoes, has been increased to 22 perishable items. This would promote creation of infrastructure and value addition for horticulture products. Also, the Budget allocation for the schemes such as Agriculture Export Policy (AEP) and Transport and Marketing Assistance (TMA) has been enhanced, which will help in the implementation of AEP in States and boost agriculture exports.

National Institute of Naturopathy, Pune in association with…

Speaking on the plantation sector, the Commerce secretary said that Rs. 1,000 crores have been provided in the Budget for the welfare of tea workers, especially women and their children. This will benefit around 10.75 lakh tea workers, including 6.23 lakh women workers engaged in the big tea estates of Assam and West Bengal. In addition, around 1.47 lakh small tea growers are also likely to be benefitted.

Dr Wadhawan said that this Budget also promotes ease of doing business through rationalization of procedures, easing of compliances and trade facilitation measures. The measures include certain changes in the provisions relating to ADD and CVD levies, mandatory filing of bills of entry before the end of day preceding the day of arrival of goods, he added. He further added that streamlining of the ADD / CVD provisions, including measures aimed at enforcing anti-absorption, will potentially enable a level playing for domestic industry through addressing unfair trade practices.

The commerce Secretary said that the Budget has proposed rationalization of customs duty structure with a thrust on both easy and competitive access to raw material and infant industry protection objectives to encourage exports, particularly of value-added products. This includes reduction in duties on critical raw-material such as iron and steel, copper scrap, naptha, nylon fibre and yarn, etc. To rationalize the duty structure of gold and silver, the rates have been reduced to 7.5% from 12.5% with Agriculture Infrastructure and Development Cess of 2.5 %.