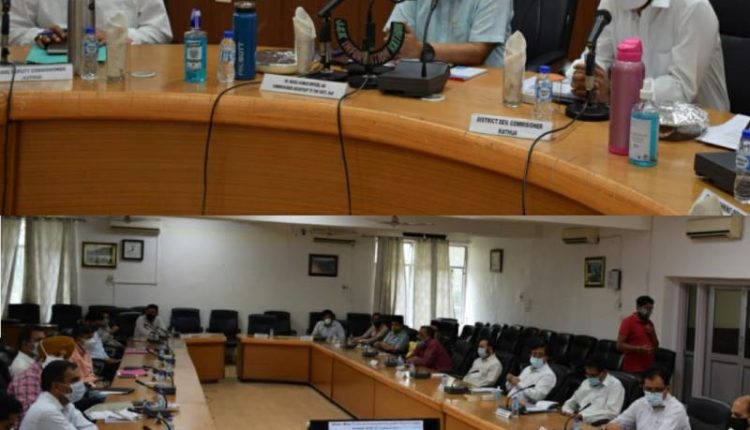 While presenting the sector wise performance under last Capex budget, DDC informed the meeting that the district has achieved 100 per cent expenditure of the available allocated funds under schemes like NRLM and PMAY besides achieving 99 per cent achievement under MGNREGA of Rural Development Department.

Commissioner Secretary, while discussing different plan components, said that with the functioning of three-tier Panchayati Raj system the development priority has to be set by the elected PRI representatives through a laid down procedure. He said planning must be done to make tangible assets benefitting larger portion of the community. He also called for taking up convergence to achieve multi dimensional development targets.

While laying thrust on taking development spree at all levels, Commissioner Secretary said the development and Corona control measures will go side by side and every endeavor shall be made for strict adherence to Covid guidelines while undertaking development works.

He underscored the importance of covering all uncovered habitations while formulating Jal Jeevan Mission so that benefit reach to the last beneficiary. He also called for prioritizing drinking water connectivity to Girls Schools and Aanganwadi centres while making micro planning of Jal Jeevan Mission.

He directed the DDC to take periodic review of the planning status and ensure removal of existing flaws in execution of development schemes by personally visiting the sites. He asked him to focus on resolving issues being confronted in smooth execution of PHE and Irrigation related schemes.

DDC apprised that committees are being constituted under the chairmanship of Nodal Officers of different departments to process sector wise planning involving all stakeholders.

Manoj Kumar Dwivedi also called upon the concerned officers to look upon the self employment sector and chalk out ways to reach out to maximum beneficiaries in this year’s Capex budget. He asked CPO to micro-review the sector wise planning and keep department wise analysis on daily basis. He also held detailed discussion on tendering process of development works and effective mechanism for e- tendering of works to be taken up under Capex.