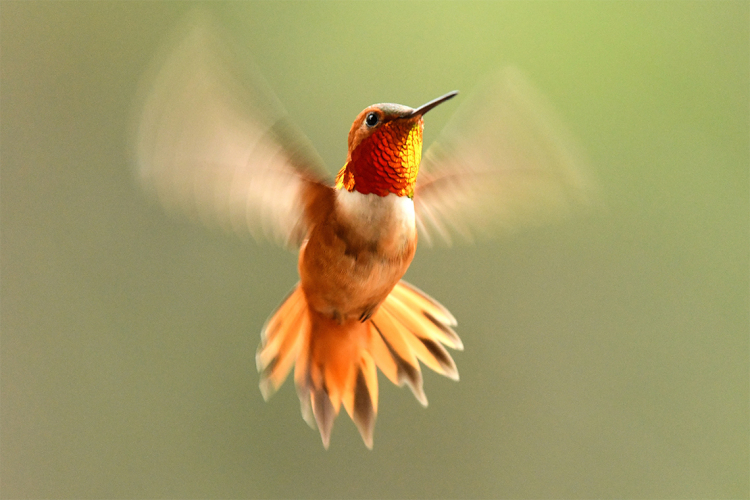 Hummingbirds need an incredible amount of energy to flap their wings 50 times per second to maintain hovering flight. Their metabolism is so supercharged that if they were human-sized they would consume energy at a rate more than 10 times that of an Olympic marathon runner.

But a new University of Toronto study has found that a common agricultural pesticide might be slowing down the crucial physiological process that makes hummingbirds so unique.

“”
Researchers in Associate Professor Ken Welch’s lab in the department of biology at U of T Scarborough discovered that a common insecticide – which is chemically related to the nicotine found in tobacco – can slow the metabolism of ruby-throated hummingbirds by as much as 25 per cent in the hours after exposure.

“We don’t know exactly why it goes down – whether the chemical is disrupting the metabolic processes or because they simply feel sick as a result of exposure – but they definitely show a reduced metabolic rate during the first few hours after ingesting it,” says Welch.

Neonicotinoid pesticides, introduced in the 1990s and now the most common type of insecticide in the world, are effective at killing insects because they can be transported to every part of a sprayed plant including the leaves, stems, roots, flowers, nectar and fruit. They can also persist in the soil and the plant for more than a year. However, the effects of pesticide concentrations in wild birds are just beginning to be understood.

Welch says that hummingbirds may be especially prone to the negative effects of exposure because they encounter the pesticides in a number of ways, including through spraying, eating contaminated insects and, especially, drinking the contaminated nectar of sprayed plants.

He says it’s also clear that hummingbirds are being exposed to these chemicals in the wild, pointing to recent research where the chemical was found in hummingbirds that lived near sprayed blueberry crops in B.C.’s Fraser Valley. The research, by Welch’s collaborators at Environment and Climate Change Canada, found the chemical in the nectar of blueberry plants up to a year after it was sprayed, and also in the urine samples of hummingbirds collected during the spring and summer.

It begs the question about the long-term effects of chronic exposure.

“We only looked at the first few hours after exposure, but theoretically there could be a long-term impact on the central nervous system,” says Welch, a renowned expert on hummingbirds.

He explains that the pesticide works by essentially paralyzing an insect’s ability to breathe and move through disruption of the nervous system.

“We could assume that those potential risks also exist for hummingbirds through long-term exposure. At the moment, we just don’t know. It would require more research.”

The study, published in the journal Scientific Reports, which received funding from Environment and Climate Change Canada and the Natural Sciences and Engineering Research Council of Canada (NSERC), raises important policy considerations. While all outdoor uses of several neonicotinoid pesticides were banned in Europe in 2018 to protect wild bees, they are still commonly used in North America.

At the very least, Welch says some consideration should be given to when the pesticide is sprayed, especially during periods when vertebrates or important pollinators are active to reduce the chances of exposure.

“If hummingbirds are skipping their normal foraging behaviour because of a dip in their metabolic rate, it could put them in an energy bottleneck,” he says.

“If they’re already low on energy, and then they are exposed to this pesticide, that hummingbird may very well find itself in an energetic crisis not too long after.”

Climate change slows reduction of methylmercury levels in Arctic: U of T researchers