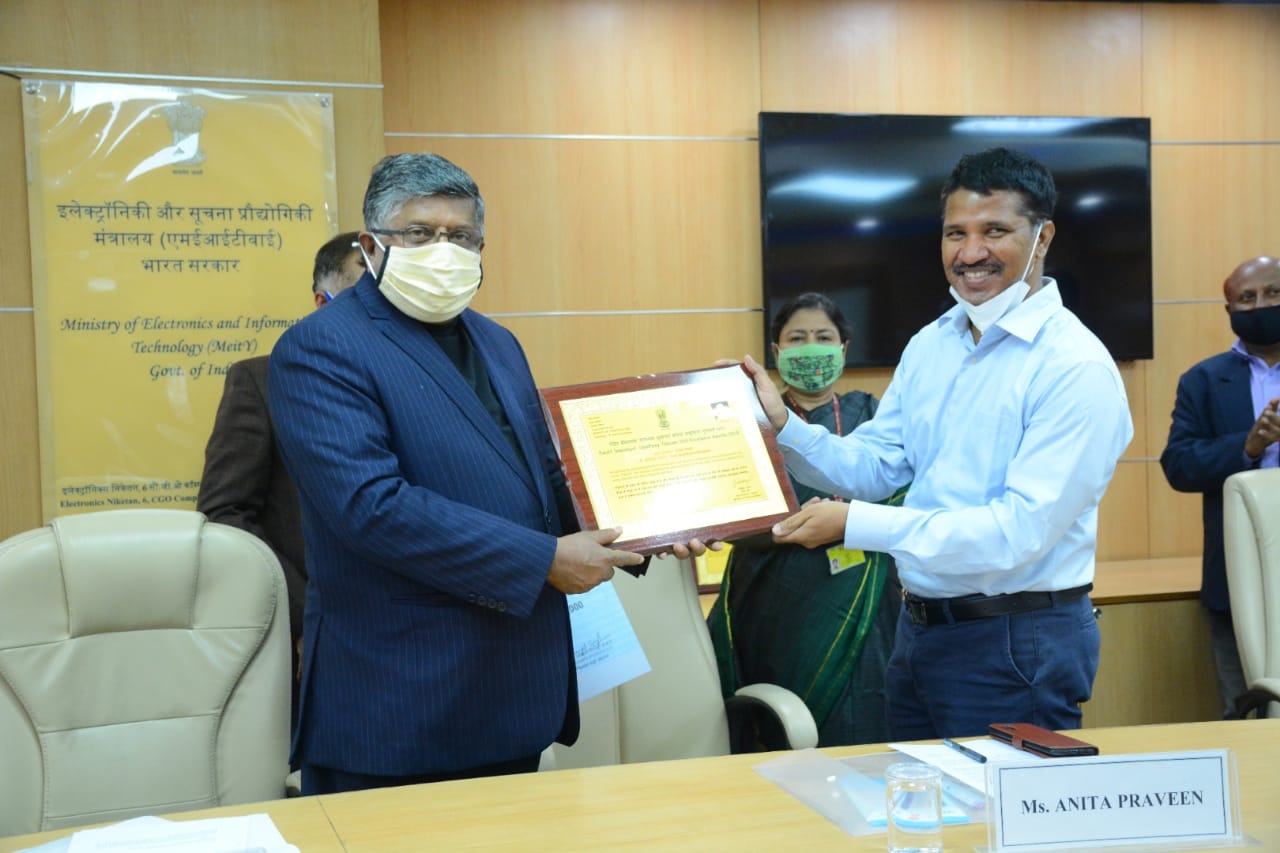 New Delhi: Shri.Ravi ShankarPrasad, Minister of Communications and Electronics &IT and Shri. Sanjay Shamrao Dhotre, Minister of State for Communications and Electronics & IT, presented the Pandit Deendayal Upadhyay Telecom Skill Excellence Awards including cash award of Rs 50,000 and Rs 30,000 respectively , to both awardees on 18.12.2020 in the presentation ceremony organized in Electronics Niketan,CGO Complex,New Delhi, in presence of Members of Digital Communication Commission, AS(T) and other senior officers of DoT.

To motivate the Telecom Skill ecosystem, DoT launched Pandit Deendayal Upadhyay Telecom Skill Excellence Awards scheme in 2017, to reward the successful telecom skilled people for their special contributions in the areas of Telecom Skilling, Telecom Services, Telecom Manufacturing, Telecom Applications in deploying telecom dependent sectoral solutions for different fields such as agriculture, commerce, health, education etc. The award was named after Pandit Deendayal Upadhyay ji to commemorate his birth centenary. The nominations were called for the first time for year 2018. The winners of the award were declared by Dept. of Telecom on 8.9.2020.

Sreenivas Karanam, Bangalore was selected for the FIRST prize for his contribution in developing a cost-effective customized technical solution under the brand ‘C mobile’, for deep sea communication, operating along the Kerala coast, facilitating communication among fishermen and issue of weather alerts etc . The service enables the fishermen to have one-one voice calls, group calls, SMS , Location services and Emergency services while they are out of GSM coverage area. The service is available from Thiruvanathapuram to Calicut, almost 500km along Kerala coast, with devices installed in nearly 900 motor boats.

Prof.Subrat Kar, New Delhi was selected for the SECOND prize for his innovative solution on development & deployment of a large scale sensor network and devices to avoid train-animal collision , which works without interfering with natural movements/behaviour of animals, thereby helping in wildlife conservation. The system under pilot phase, is installed in Rajaji National Park in Uttarakhand , to prevent elephant deaths by train-elephant collision.

Both the Ministers appreciated the efforts of both awardees in leveraging the telecom technology through their innovative ideas for the benefit of fishermen and in wildlife conservation.

MoC while interacting with Sh.Karanam, opined that that the system can be made operational in coastal areas of other states like Karnataka,Tamil Nadu, Odisha so that more fishermen can be benefitted as it is successfully operating along Kerala coast. While interacting with Prof.Kar, he expressed that such kind of sensors are very much needed in other corridors where wild elephants and other animals often cross railway tracks and lose their life due to collision with speeding trains.

MoSC called upon Prof.Kar to extend this idea to detect crop raiding by elephant herds in villages in many states, for the benefit of farmers.

Further to this, DoT has recently invited nominations for Awards for year 2019, last date of which is 23.2.2021. Details are available on DoT website www.dot.gov.in .