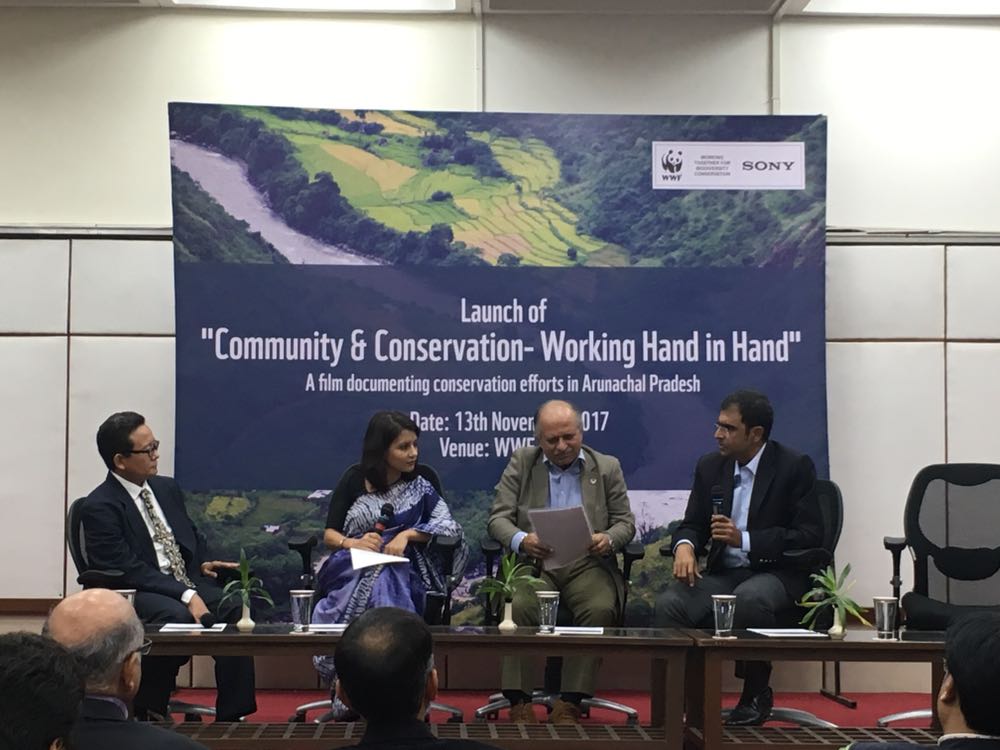 New Delhi: A short film ‘Communities and Conservation: Working Hand in Hand’ was launched at WWF-India, New Delhi last evening. Produced as part of a collaboration between WWF-India and Sony India’s work in western Arunachal Pradesh, the film documents the partnership with local community members through a Community Conserved Areas model towards conserving the red panda habitat in the state.

Arunachal Pradesh has the highest concentration of biodiversity in India, with 82% of its land area under forest cover. These forests are home to more than half of all bird species found in India and one-third of all plant species of India, along with iconic species such as the red panda, snow leopard and the black-necked crane.

Unique to this region is the fact that more than 60% of forests in the state are owned by local communities. With communities being the most important stakeholders, no conservation effort in the state can be successful without their involvement to protect the region’s wildlife species and their habitats. The film showcases the Community Conserved Areas (CCAs) initiative in Arunachal Pradesh, supported in the recent years through the WWF-India and Sony India partnership, alongside other supporters, that help empower local communities to implement conservation initiatives. The film features voices of these local communities in the CCAs who are part of committees undertaking wildlife monitoring, patrolling, and community-based tourism activities. The film also highlights the conservation initiatives for the red panda in western Arunachal Pradesh.

Sony India’s support to WWF-India under its CSR mandate also includes support for conservation of the snow leopard and the creation of audio-visual content to showcase WWF-India’s tiger conservation initiatives among local communities, State Forest Departments, school students and an urban audience.

Speaking on the occasion, Mr. Sanjay Bhatnagar, National Head, Human Resources, Facilities & Administration and Corporate Social Responsibility, Sony India said, “We understand the importance of CSR at Sony India and believe in utilizing our strengths to contribute extensively to the society. For this project, we are delighted to partner with WWF-India that has worked closely with the community for conservation of the endangered red

pandas.” He further added, “We aim to achieve sustainability and this project is not an exception. We are committed to the cause and will continue to work with WWF-India in aiding resources so that this able initiative continues with more fervour and dedication.”

Speaking about the partnership, Mr. Ravi Singh, Secretary General and CEO of WWF-India said “Sony-India’s support to the project has contributed towards achieving measurable impacts on ground. Initiatives such as these encourage that community members retain their traditional rights over the forest and also conserve the unique wildlife they support.”

Following the launch, Mr. Prosenjit Ghosh from the Corporate CSR team, Sony India joined Mr. Ravi Singh, Secretary General & CEO of WWF-India, and Mr. P. Ringu, IFS, Director of North Eastern Institute of Folk Medicine, Ministry of Ayush, Government of India, Arunachal Pradesh on a panel to talk about the initiatives and challenges to protect the red panda habitat in the state. Moderated by Ms. Gargi Rawat, NDTV, Mr. Ringu highlighted the importance of community stewardship and the crucial role it plays in conservation of wildlife in the state, since only a fraction of the wildlife habitat in the state falls in protected areas. He went on to speak about the custodianship of the communities and how it has led to the forests continuing to provide a safe haven to the lesser known but iconic species of the region, like the red panda and rhododendrons. Mr. Ghosh spoke about SONY India’s partnership with WWF-India and why the company chose to support the Western Arunachal Landscape under its CSR mandate where communities are being empowered to manage their natural resources. Mr. Ravi Singh, SG & CEO of WWF-India spoke in depth about the community conservation model and mentioned seven Community Conserved Areas (CCA) that have been formed in West Kameng and Tawang districts. He also spoke about community-based tourism (CBT), introduced as part of this initiative to provide economic incentives to the local communities for conserving the CCA.

Smile Foundation is back with the Third Edition of SIFFCY