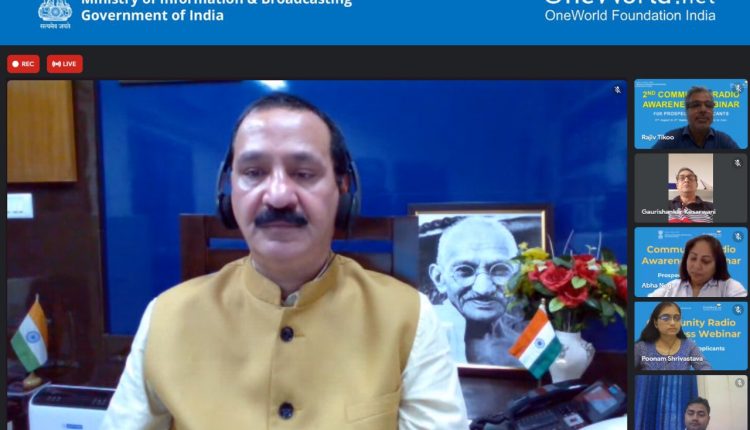 New Delhi: “There are 335 Community Radio Stations in India that reach out to almost a 100 million population of the country. Community Radio plays an important role in empowering people in times of crisis. ‘Sabka Saath Sabka Vikas’ can be possible only by connecting the people of the community with each other.” This view was shared by the Director General of the Indian Institute of Mass Communication (IIMC), Prof. Sanjay Dwivedi at the Valedictory session of ‘Community Radio Awareness Webinar’ organized by the Ministry of Information and Broadcasting and OneWorld Foundation India. Additional Director, Community Radio Cell, Ministry of Information and Broadcasting, Mr. Gaurishankar Kesarwani, Managing Director of OneWorld Foundation India, Mr. Rajiv Tikku and Ms. Abha Negi were also present in the program.

Prof. Dwivedi stated that we need to recognise who needs our help and how they would develop and benefit with that help. He also said that there is need for cooperation between the community, administration and government in order to improve the lives of those members of society who lack access to governance and administration. According to Prof. Dwivedi, Community Radio not just pays adequate attention to problems, but actively seeks to address them. During the Covid-19 Pandemic, six stations in Uttarakhand joined together to form the ‘Ek Ummed Network,’ which disseminated information about how to prevent Covid. In the current times of a Pandemic, the administration has also recognised the role and importance of Community Radio in disseminating information to the public.

According to Prof. Dwivedi, Community Radio Stations communicate with people in their own language, which not only helps to preserve the language but also spreads it to the next generation. Community Radios not just promote culture through folk songs, they also inform the public about government programmes.