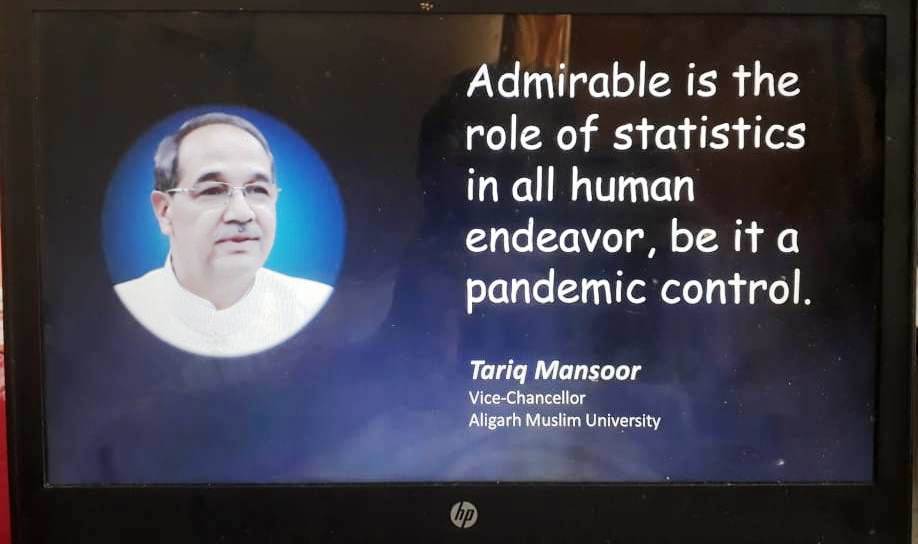 Compilation of Words of Wisdom in Statistics released

Aligarh: In a first, the important quotes of Indian Scholars on Statistics discipline have been compiled for popularizing them among the general populace. The project ‘So Say Indian Scholars’ includes saying by 100 eminent Indian scholars and is now available on You Tube.

Amongst the eminent contributors, the quotes of seven contributors from Aligarh Muslim University too have found place namely Vice Chancellor, Prof Tariq Mansoor, Prof Qazi Mazhar Ali, Prof Aquil Ahmed, Prof Yusuf Uzzaman Khan, Prof Athar Ali Khan, Dr Irfan Ali and an AMU alumnus Mr Zaheer Ahmed. The project has been launched through Google Meet on Tuesday by Prof J P Singh Joorel, the Director, INFLIBNET Centre and Dr R C Agrawal, Deputy Director General, ICAR. The compilation also includes one of the sayings of Mahatma Gandhi. Livia Tandon noted that Mahatma Gandhi has said ”It has been truly said by economists themselves that Statistics made to prove two contradictions”. While formally releasing it, Prof Joorel, the Director INFLIBNET, invited the scholars to undertake such exercises for all subjects, under the project ”So Say Indian Scholars”.

Prof Qazi Mazhar Ali informed that the project has been conceived in the backdrop of strong observations that regarding our subject Statistics, ”we often refer to foreigner scholars on some statements, saying, quote etc. With due respect to them, question is, do Indian scholars have no such thoughts which could be quoted or stated by others. Can?t we give one original sentence on our subjects and topics which could be quoted by our students with conviction?” Prof Ali said.

The pilot project ‘So Say Indian Scholars’ has been launched with the subject Statistics, the parent disciple of Prof Joorel and Dr R C Agrawal. For this experiment, Prof Ravi K Mahajan and Prof Kalpana Mahajan of Panjab University, Chandigarh were invited because of their experience in making lap-top based documentaries. The duo, with the support of Prof Qazi M Ali (Aligatrh Muslim University), Prof Rahul Gupta (Jammu University) and Prof Manoj Saxena (Central University of HP), compiled the saying from 100 Indian stakeholders and the first compilation got ready in e-format to be put on YouTube for quick global reach. It will be soon released in an e-Book form.

In this attempt, after a passing reference to the sayings of some foreign scholars, saying from Indian scholars hailing from all the corners of India and all walks of life have been complied. These sayings have come from legends like Prof Anil Gore and Prof J V Deshpande, besides some Vice Chancellors, former Vice Chancellors, engineers, medical professional, architect, accounts, media, Yoga teacher, even cartoon maker have made their contributions.