Former U.S. Secretary of State Condoleezza Rice, currently the Denning Professor in Global Business at the Graduate School of Business and the Thomas and Barbara Stephenson Senior Fellow on public policy at the Hoover Institution, and a former Stanford provost, will be Hoover’s next director, Stanford President Marc Tessier-Lavigne announced. 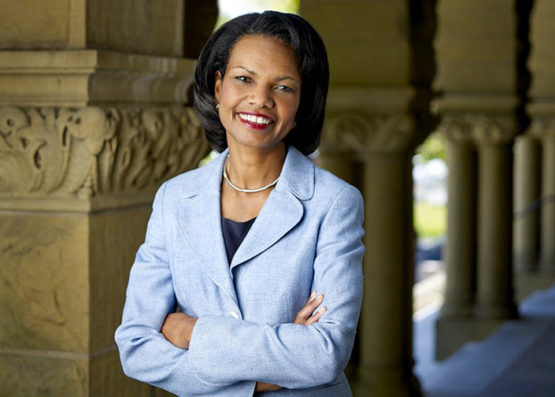 Rice will assume her post as the Tad and Dianne Taube Director of the Hoover Institution on Sept. 1. She will succeed Thomas Gilligan, who has served as director for five years and announced his departure in 2019.

“We are very fortunate to have Condoleezza Rice assume the helm of the Hoover Institution,” Tessier-Lavigne said. “Her accomplishments as a scholar, strategic thinker, and public servant and her deep commitment to Hoover make her the ideal leader for defining the next chapter in Hoover’s long and distinguished history. She is also an exceptional teacher and is strongly committed to Stanford, having served as the university’s provost for six years and a member of our faculty since 1981. I and many other leaders at Stanford have greatly valued her wisdom and counsel and look forward to welcoming her to our executive leadership team.”

Tessier-Lavigne also thanked Gilligan for his service to Hoover and Stanford during the last five years.

“Tom has added to the breadth and depth of Hoover’s impressive fellowship, initiated new programs to broaden the impact of its research and well-positioned the institution for its second century,” he said.

Rice said she is looking forward to assuming the helm at Hoover and shaping the future of an institution that addresses some of the most difficult challenges facing the country and the world.

“I’m honored to be named as Hoover’s next director,” Rice said. “Both the Hoover Institution and Stanford University are places that believe in the study and creation of ideas that define a free society. The nurturing of these ideas, the value of free inquiry and the preservation of open dialogue are the backbone of democracy. It will be a privilege to lead the institution as it moves into its second century and to work with the outstanding fellows who seek dynamic solutions to the incredible challenges on the horizon.”

Rice was the 66th secretary of state of the United States, the second woman and first African American woman to hold the post. She also served as President George W. Bush’s national security advisor. Rice joined Stanford University in 1981, where she served as provost from 1993 to 1999 and has been a Hoover Institution senior fellow since 1991. During her tenure at the university, she has won two of its highest teaching honors: the Walter J. Gores Award for Excellence in Teaching and the School of Humanities and Sciences Dean’s Award for Distinguished Teaching.

Upon leaving government, Rice resumed an active teaching and research agenda. She has taught both undergraduate and graduate students, including courses in American foreign policy, several honors colloquia and a course in political risk at the GSB. Rice has authored or co-authored nine books, including three bestsellers. She serves on several boards and is an accomplished pianist. A devoted sports aficionado, Rice served on the inaugural College Football Playoff Selection Committee and chaired an NCAA commission on the future of college basketball. She is the faculty fellow for the Stanford Women’s Golf Team.

“As a teacher and mentor, Professor Rice is exceptional,” said Vivek Viswanathan, a former student who serves as chief deputy director for budget for California Governor Gavin Newsom. “She challenges students to strive for precision in their thinking and writing and inspires them to pursue careers in policy and public service.”

“There is no one, anywhere, better suited than Condoleezza Rice to lead the charge to build upon the legacy of the Hoover Institution and launch it into its second century of generating ideas and actions that lead to greater economic freedom and political freedom in the United States and around the world,” said John B. Taylor, professor of economics at Stanford, a Hoover senior fellow and chair of the 10-member search committee.

“To be able to attract a talent of Condoleezza Rice’s caliber to lead the Hoover Institution is a testament to the Institution’s evolution from what began as a library in 1919 to what is now one of the leading academic public policy research centers in the world,” said Tom Stephenson, chair of the 122-member Hoover Board of Overseers.

The Hoover Institution at Stanford University is the nation’s preeminent research center dedicated to generating policy ideas that promote economic prosperity, national security and democratic governance. It is the only such institution composed of both a fellowship of scholars and a world-renowned Library & Archives. Over its 100-year history, Hoover scholars have created innovative ideas enacted for the betterment of humanity and have contributed to the translation of those ideas into the implementation of public policy.