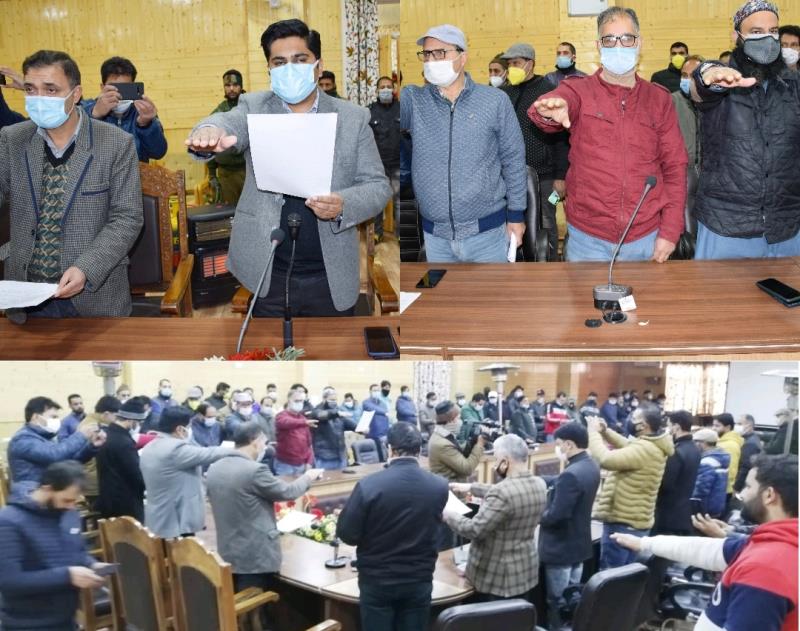 Constitution Day celebrated across all the district of Kashmir Division

Srinagar: The Constitution Day was today on 26 November, 2020 celebrated across all the districts of Kashmir division.

On the occasion, the Deputy Commissioners (DCs) presided over the functions organised at respective DC Office Complexes.

The DCs highlighted the significance of observance of Constitution Day and to acquaint the participants regarding its prominent values. They also read preamble of the constitution and administered a pledge to uphold the fundamental duties to District officers and officials, present.

At Budgam: An impressive function was today organized in the Conference Hall, Budgam to celebrate Constitution Day.

On the occasion, Additional Deputy Commissioner Budgam, Dr. Nasir Ahmad urged upon all officers/officials to maintain sense of brotherhood, achieve idea of social, economical and political justice, liberty of thought and expression, equality among all and element of fraternity as enshrined in the preamble of our constitution.

At Ganderbal: To celebrate the Samvidhan Divas, also known as the Constitution Day, a grand event was organized at Mini Secretariat, Ganderbal to commemorate the day of adoption of the constitution of India.

This day is celebrated every year in the country to remember the father of the Constitution, Dr. B.R Ambedkar.

At Baramulla: To mark the celebration of Constitution Day in the district, an impressive function was today organized in DC Office Complex, here.

On the occasion, Deputy Commissioner (DC) Baramulla, Dr G N Itoo highlighting the significance of the day, he threw light on various aspects of the constitution including the fundamental rights and fundamental duties.

He emphasised upon different stakeholders to abide by the principles laid down in the constitution and said that the day reminds us about various guaranteed rights and privileges.

At Pulwama: To commemorate the Constitution Day, a function was held today at DC Office Complex Pulwama.

The Deputy Commissioner (DC) Pulwama, Dr Raghav Langer was the Chief Guest on the occasion.

The DDC highlighted the significance of observance of constitution day and to acquaint the participants regarding its prominent values. He said 26th November has its significance in the history of our country when the constitution of India was adopted in 1949 and came into force on 26th January 1950.

He said it is our responsibility to educate the people about values and precepts of the constitution.

At Bandipora: The District Administration Bandipora on Thursday celebrated Constitution Day to remember the father of Constitution, Dr. B.R Ambedkar.

It may be recalled that on November 26, 1949, the Constituent Assembly of India formally adopted the Constitution of India. It came into force on January 26, 1950.

Deputy Commissioner Bandipora Dr Owais Ahmad urged all the officers to take necessary steps for the national campaign, focusing on creating awareness regarding the fundamental duties.