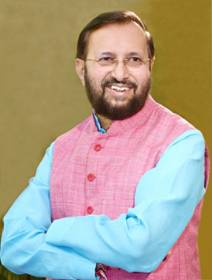 New Delhi: Union Minister for Information and Broadcasting, Shri Prakash Javadekar today said that he was eager to raise air time for advertisements to 12 minutes from 7 minutes on Community Radios currently to bring them at par with TV channels. The Minister was addressing listeners of all Community Radio stations in a unique initiative by way of a simultaneous broadcast. The broadcast took place in two equal slots today between 7 PM and 7:30 PM.

Sh. Javadekar said that while 75% of the expenditure during setting-up of Community Radio stations is borne by the Ministry and that comprises a major expenditure, daily operations’ expenditure is borne by the Station. The Minister pointed out that currently Community Radio stations are allowed air time of 7 minutes per hour for advertisements while the same is 12 minutes for TV channels. He added he was eager to give equal time to all radio stations so that there is no need for them to seek funds and that local advertisements can be relayed more on community stations.

In his opening remarks, the Minister said Community Radio is a community in itself. Terming them ‘agents of change’, he said that the stations reach out to millions of people every day, and that the Ministry will come out with a plan to increase the number of such Stations soon.

Exhorting people to keep up their fight against Coronavirus, the Minister said that we will drive it away the way we have driven away other diseases. However, he highlighted that we have a new normal, one that consists of 4 steps viz, staying at home as much as possible, frequent washing of hands, wearing face mask in public and social distancing.

Speaking on the dilemma between the challenges of social distancing and economic activity, the Minister re-iterated the mantra of “Jaan Bhi Jahaan Bhi” and said that while restrictions are continuing in Containment Zones, economic activities are starting up in Green Zones.

The Minister touched on the key demand of Community Radio of broadcasting news on their channels. He assured that he will consider allowing news broadcast on Community Radio the same way it is done on FM channels. He prodded such stations to play key role in combating fake news menace by taking note of such news in circulation and verify it through local sources to act on it. He invited Stations to share it with All India Radio also, so that the reach of the truth can be amplified. He added that the Ministry has created a Fact Check Cell under PIB and the Community Radio can complement the role of Fact Check Cell.

Speaking about Aatmanirbhar Bharat Package recently unveiled by the Union Minister of Finance and Corporate Affairs, Shri Javadekar said it was a comprehensive package which included reforms for various sectors including agriculture and industry, and that package is aimed at reducing imports and increasing exports. He added that the package has been received well and people are happy with the stimulus.