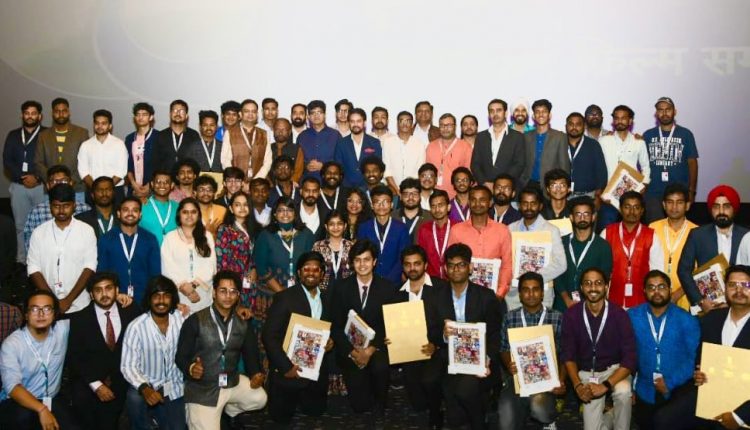 The Minister said that, “There is no dearth of talent and skill in India, these young talented minds needed an opportunity and what’s better than the platform of India@75 under Azadi Ka Amrit Mahotsav, to boost their morale and lead the film industry in the coming days.”

The Union Minister noted that the 75 creative talents present at IFFI are so fortunate that they would be getting the opportunity to learn and interact with the best minds in the film industry which many aspirants do not get even after decades of strenuous efforts. “The eminent personalities of the jury have spent hours together to go through the hundreds of creative works received for selecting the 75 best among them. And here you have the opportunity to learn from the icons of the cinema industry”.

“Whatever creative work you do, it doesn’t matter what the platform is, but what matters is the content. If the content is good it will certainly leave a mark in people’s minds. Here you will be attending Masterclasses by the icons of the Indian Film industry so that you all can learn the best practices and techniques of the craft which will equip you to create powerful content,” the Minister added.

Talking about changes and improvements which have happened over the years in the Festival, the Union Minister said: “In my interaction with various delegates and participants at the venue of IFFI 52, I have gathered that ‘75 Creative Minds’ is the major welcome change that has happened in IFFI in the recent years.”

The Minister also urged the young winners to write blogs about 75 Years of India’s Independence and also to express and share their feedback and learning experiences at IFFI 52. Emphasising that learning is a never ending process, Shri Thakur urged all the young minds to build a robust career based on their learnings and contribute to the growth of the film industry.

The Minister urged the industry and the ‘young creative minds’ to strive to project the soft power of India to the world through their craft. He said that Film Facilitation Office (FFO) set up by the Ministry of Information & Broadcasting is making all efforts to make the country a favourite production and shooting destination. He added that with the skill and technology that we have, our country can easily become the post-production hub and the content sub-continent of the world.

Aspiring Actors should train themselves as Olympic athletes: Hrithik Roshan

The King of All the World is Carlos Saura’s comeback film to the world of fiction after a gap of 12 years: Eusebio Pacha, Producer of IFFI 52 Opening Film