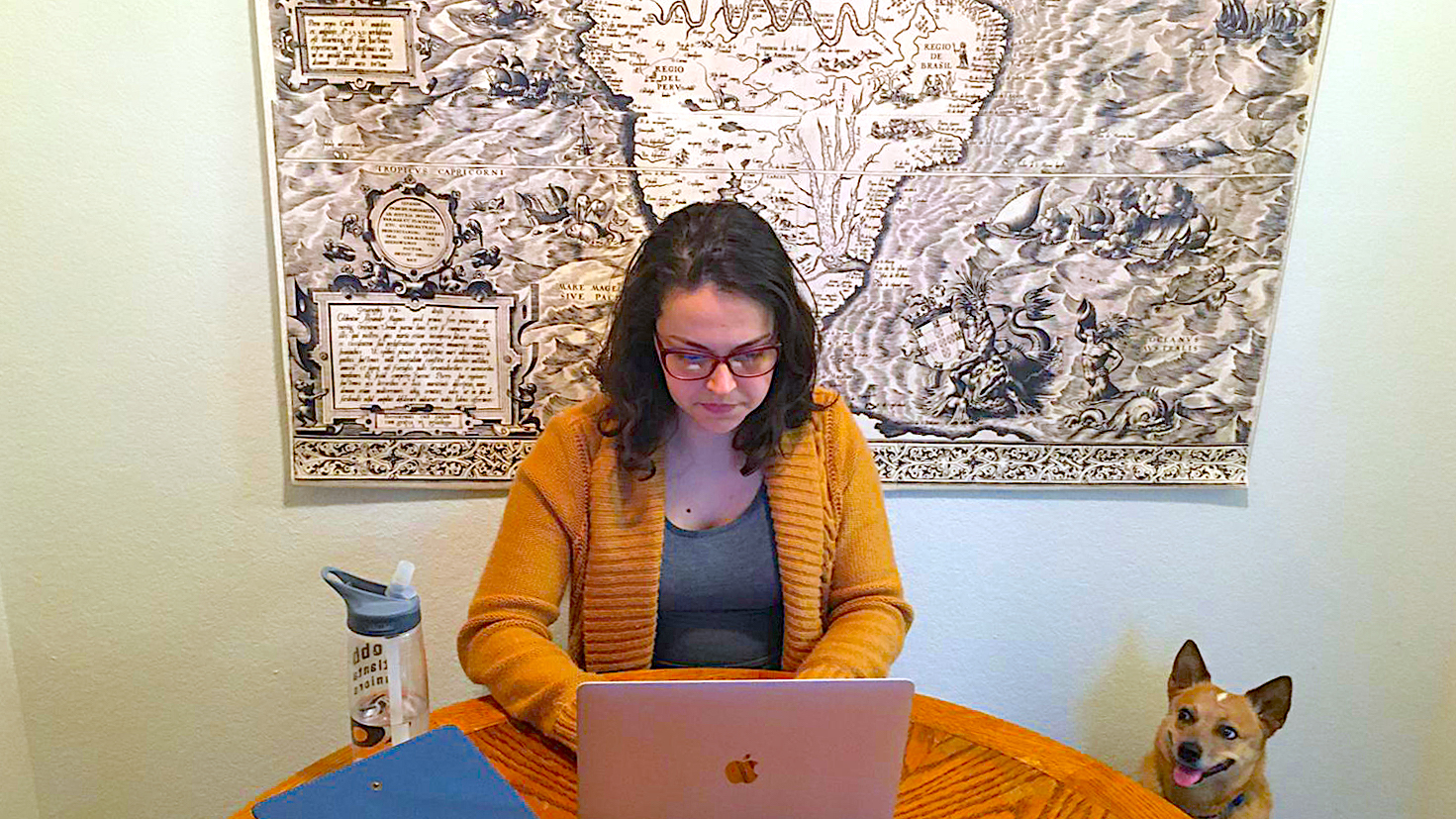 In the week before the start of online classes, doctoral student Amanda Domingues drove from Ithaca to shelter in place with her partner in St. Louis, Missouri.

“I grabbed my things as fast as I could,” Domingues said. She scooped up her beloved dog, Pa (a stray she had rescued off the streets of São Paulo, Brazil, her home country), along with suitcases of clothes, boxes of books and a computer – which was broken, she later discovered.

“When I logged in to Zoom, I found out my audio wasn’t working,” she said.

But thanks to a laptop loan program run by Cornell University Library, Domingues was soon able to use a reliable computer for her virtual courses in the Department of Science and Technology Studies, her graduate student group discussions and her teaching assistant duties for an undergraduate class on ethics and the environment.

“I sent the library a message on a Friday and by Tuesday the computer was here,” she said. “It was amazing.”

As part of its efforts to support online learning , the library started sending out its loaner laptops to Cornell undergraduates and graduate students in the first week of April. To date, it has shipped 32 laptops; the computers are on loan until the end of the spring semester, with the possibility of renewal. Additional laptops are already being processed for delivery, and a limited number are still available for students to request by emailing the library.

“It’s a practical way we can help support Cornell’s educational programs during this difficult time,” said Simeon Warner, associate university librarian overseeing the library’s information technology. “It’s certainly useless for us to have a stack of laptops sitting in a closed building. They should go into the hands of students who need them.”

Lisa Nishii, vice provost for undergraduate education, was already coordinating emergency support efforts to get students ready for online instruction through the Student Access Fund , and she partnered with Cornell University Library, Cornell Information Technologies and colleges across the university to field library laptop requests from students during Cornell’s extended pause.

“It’s heartwarming that, in that three-week period, we were able to figure out the students who needed help,” she said. “It really was a team effort across so many central units and the colleges to make it happen quickly.”

Several students requesting laptops through the College of Agriculture and Life Sciences were seniors who had been relying on library computers throughout their time at Cornell, said Ann LaFave, director of student services for the college.

“They were the students most impacted by the remote learning situation,” she said. “It was fantastic that the library could continue the laptop service.”

One of these seniors is Malik Leary ’20, a first-generation college student majoring in anthropology and society. Over the break, he drove back home to Shreveport, Louisiana, to a house shared with his parents, a younger brother and sister and an older cousin with a wife and three kids.

He said the library laptop he received the week before the start of classes was a financial relief for him and his family as they pool their resources together and focus on the necessities during these uncertain times.

Leary acknowledged the challenges of adjusting to being home again and finding a quiet space to focus on his studies. “I am just very grateful that I’m a big family person,” he said with a laugh.

Weill Cornell to use $2M from Citadel in COVID-19 fight

iednewsdesk Jun 15, 2021
Griffith University in partnership with ADA Law, has launched a new suite of resources on World Elder Abuse…