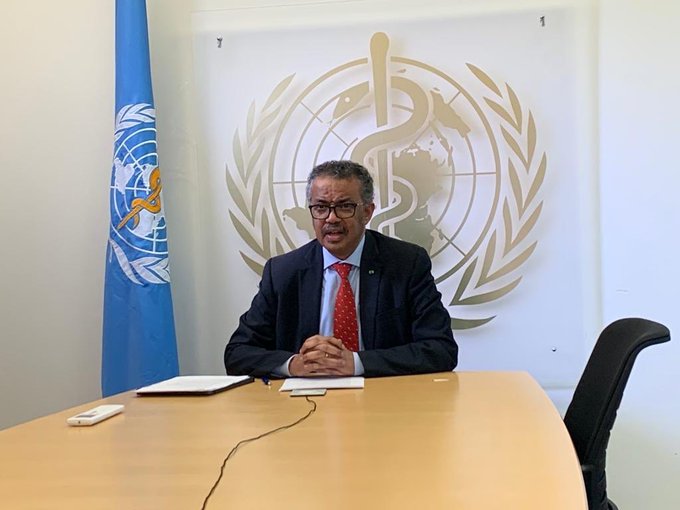 Tedros Adhanom Ghebreyesus reiterated the UN’s appreciation committing to further strengthen WHO’s mandate in coordinating the international fight, noting that “all of your countries have been affected, and you are all at different stages of the response.”

The #COVID19 pandemic has reminded us of a simple truth: we are one humanity. Today I was honoured to join the @g20 Health Ministers meeting to express @WHO’s gratitude for their leadership and commitment to combat the current crisis & ensure this never happens again.

With some countries such as Austria, Germany and Italy, beginning to announce an easing of restrictions in line with encouraging data such as falling caseloads and hospital deaths, Tedros said it was key to see lifting so-called lockdown restrictions as “not the end of the epidemic in any country; it’s just the beginning of the next phase.

“It’s vital in this next phase that countries educate, engage and empower their people to prevent and respond rapidly to any resurgence”, he said adding that it was essential to ensure they have capacity to “detect, test, isolate and care for every case, and trace every contact, and to ensure their health systems have the capacity to absorb any increase in cases.”

He welcomed a pledge from G20 chair, Saudi Arabia of $500 million to support global efforts against the pandemic, including concrete action with the G20 Global Innovation Hub for Improving Value in Health, the Digital Health Task Force and the Global Patient Safety Leaders Group.

“And we continue to fulfil our mandate to coordinate the global response, working with partners to save lives. We’ve engaged thousands of scientists and experts all over the world to develop detailed technical guidance for countries. We’ve shipped supplies of lab diagnostics and personal protective equipment to many countries, and expanded testing capacity.”

Tedros noted that WHO had provided training for more than 1.5 million health workers, launched the Solidarity Trial, to generate robust safety and efficacy data about the four drugs which could lead to a breakthrough in treatment to lower the fatality rate.

The international community has rallied in support of the global response, he told the G20, with more than $900 million pledged thus far for the agency’s Strategic Preparedness and Response Plan.

Through the UN Supply Chain Task Force, he said WHO was working with the World Food Programme (WFP) and other partners to distribute personal protective equipment to countries all over the world.

We will soon publish a second Strategic Preparedness and Response Plan, with an estimate of the resources needed for the next phase of the response.

And finally, he called on all G20 countries to work together to increase the “production and equitable distribution” of essential supplies, and to remove trade barriers that put health workers and their patients at risk.