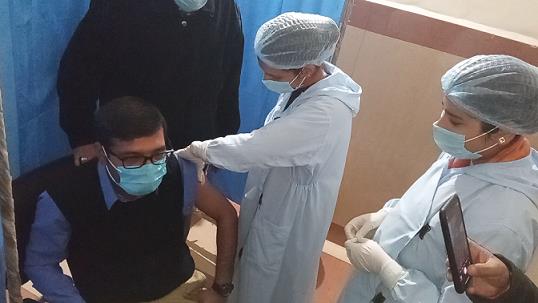 Jammu: The phase II of the Covid inoculation to cover frontline workers of civil and police departments began today in several districts of Jammu division.

At Doda: Deputy Commissioner Doda, Dr Sagar D Doifode, received first shot of the Covishield vaccine at Government Medical College Hospital, Doda along with ADC and other revenue officer/officials by following all the necessary guidelines and procedures.

Speaking on the occasion, the DC termed the vaccine highly safe and informed that all those who have been vaccinated in the district are healthy and sound.

The DC also informed that more than 1200 healthcare workers have already received first dose of the vaccine.

The vaccination was also held at all sub divisions of the district, including Mandi, Mendhar and Surankote, where vaccine was administered to Health Care Workers, frontline workers of Revenue department, ICDS, Police, Safai karamcharis etc.

The DC said that the Vaccine is safe and appealed the public to ignore the misinformation.

Series of Webinars on achievements of New and Renewable…

District Administration braces for the 2nd phase of COVISHIELD Vaccination drive in Kishtwar.*

At Kishtwar: District Administration Kishtwar kicked off the 2nd Phase of the inoculation drive. Deputy Commissioner, Ashok Sharma and other officers get the first shot at District Hospital.

The DC informed that in the first phase 350 frontline workers of health department were inoculated, while 250 revenue officials and 4000 police personnel and paramilitary forces will be administered the vaccine in the second phase.

At Reasi: Frontline workers and senior Revenue Officers of the district were given the first vaccine shot at the district hospital Reasi.

The vaccination drive was held in presence of Chief Medical Officer, Dr Rajeev Sharma and other senior Health Officers.

In her message to the public, the Deputy Commissioner said that the vaccine is safe and the only way forward in our fight against the coronavirus pandemic.

DDC reviews progress of schemes implemented by RDD at Shopian

Researchers find an improved method of imaging objects through fog

Series of Webinars on achievements of New and Renewable Energy: Bharat ka Amrut…

iednewsdesk Jun 15, 2021
Twelve students keen to experience the benefits of a regional tertiary education have been awarded rural…