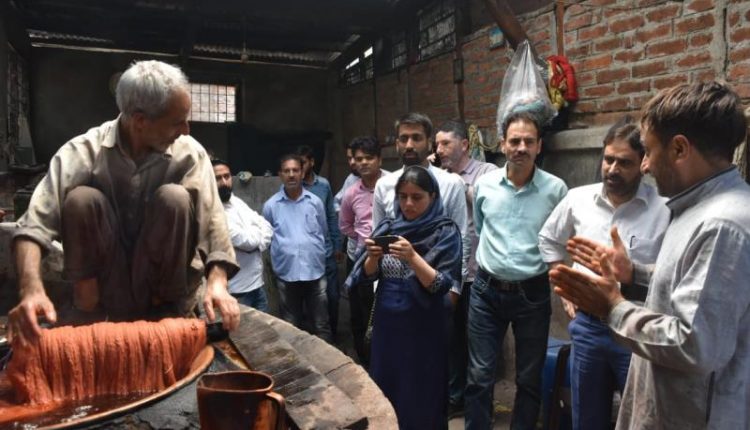 SRINAGAR: The Srinagar craft Safari today continued in the Jamia Masjid area of Downtown Srinagar. As Handicrafts and the downtown area of Srinagar city offer a vast collection of handicrafts in prominent crafts of the valley and derives a charisma and inventiveness of its own.

The officers and officials from the Handicrafts and Handloom Department, Intellectuals, Academic Scholars, Journalists, Tour operators, Students and people from art loving fields started today’s safari from the Namda Felt unit of Mr. Bashir Ahmad at Baha ud din Sahib as the Namda craft as the Department is trying hard for its revival and restore its potential to empower people associated with the craft.

The team visited the Crewel/Chain Stitch unit of Syed Noor ul lah Kashani at Shampora Khawaja Bazar where the craftsmanship of the artist was appreciated by all the participants of the Safari for its intrinsic work. Crewel is commonly used for drapery and upholstery in every household in the valley and across the country.

In his decades old dyeing karkhana the team met Mr. Nowshad Ahmad Wani who sits in a quiet street of Khawaja Bazaar where Wani sits arched in a corner. Spectacular colours have been created within his unit’s shabby walls. He explained to the visitors the process which involves the mixing and producing of the specific colours needed for the dye, the soaking of fabric in boiling, coloured water and then drying the coloured threads. The dyeing industry is boosted by the Valley’s handicraft industry, as the colourful threads which are used in designing of products.

The silverware items were appreciated by the team at the Karkhana of Mr. Tariq Ahmad Sofi who is one of the few artisans in the valley to create purely antiquated silverware. The traditional silverware with convoluted artwork has been of immense demand in the international market besides an aesthetic admiration in the domestic markets. From Quran cases, dry fruit boxes, flower vases, chinars, ornamental picture-frames, cigarette cases, tumblers and others the silverware items are admired by Kashmiris.

The safari continued to the work place of Farooq Ahmad Sheikh at Saraf Kadal where the delicately hand carved motifs turned out to be a treat for eyes. Sheikh the master artisan in the wood carving craft is an epitome of creativeness and desire. He has been creating intricate designs and life size pieces for decades.

Kashmiri Copperware locally has been an indispensable commodity in Kashmir since ages. The age old art of crafting copperware was witnessed at the unit of Toufeeq Ahmad Dar who runs the unit of innovative copper products at his unit at Choundupora Nowhatta which has earned its own name all over the world. The craftsmanship was appreciated by all the onlookers for its intrinsic work of engraving. The elegantly designed copper utensils are not only used for cooking and serving food at homes but also at largely attended weddings and other functions.

Director Handicrafts & Handloom Mr. Tariq Ahmad Zargar speaking on the occasion strengthened the pledge of the Department to make Srinagar an epitome for the rest of the valley to witness development of hubs of creativity and innovation and broaden opportunities for the artisans in the handicraft sector. The Craft Safaris are organised by the department postulates ways for the handicraft producers on how to become better integrated in the tourism value chain in order to increase their income, and to provide facilitators with the know-how to develop sustainable business linkages between handicraft producers and tourism markets, he said.

Srinagar which has been recognised as the UNESCO’s Creative City in the field of Craft and Folk Art in the UNESCO Creative Cities Network (UCCN) is globally renowned for attracting a large number of international visitors, the tourism sector, therefore offers many opportunities for the artisans to sell handicrafts, as tourists spend significant amounts of money on souvenirs and other craft products.