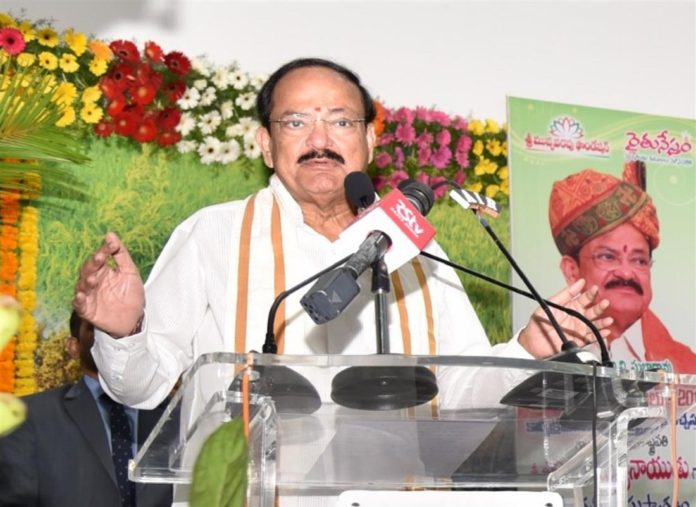 New Delhi: The Vice President, Shri M. Venkaiah Naidu has called upon doctors to create awareness among the people on the dangers posed by lifestyle diseases and the need to promote healthy living.

Inaugurating a free Medical Camp jointly organized by the Asian Institute of Gastroenterology and the Swarna Bharat Trust (SBT) in the latter’s premises in Hyderabad today, he emphasized that people must made to pay greater attention towards their health and wellness as prevention is better than cure. He said that a healthy nation can become a wealthy nation but not vice- versa. The spending on healthcare will naturally come down if people are healthy, he added.

Expressing his anguish over the lack of adequate medical facilities in rural areas, he lauded the Union Government for launching Ayushman Bharat to provide health insurance cover to five crore families in rural areas and 2.5 crore families in urban areas. The scheme would provide coverage of up to Rs. 5 lakh per family per year. He also complimented the government for planning to establish one primary health centre for every 5,000 population and increase their number to 1.5 lakhs.

The Vice President expressed his deep appreciation to eminent gastroenterologist and Chairman, Asian Institute of Gastroenterology, Dr. D. Nageshwar Reddy for organizing the free medical camp at SBT. Lauding Dr. Reddy for being service-minded, he said such qualities must be imbibed by every healthcare professional.

Later speaking after giving away ‘Rythu Nestham’ awards, the Vice President warned that there was a danger of farmers leaving agriculture unless farming was made profitable and viable. He said the emphasis should be on bringing down the input costs and not only on increasing productivity. The indiscriminate use of fertilizers, pesticides, electricity and water also need to be curbed.

Referring to the initiative taken by him to conduct national consultations on making agriculture profitable, the Vice President said that scientists must ensure research outcomes must directly reach the farmers (Lab to Land).

Observing that zero budget natural farming promoted by eminent agriculturist, Shri Subhash Palekar was beneficial, the Vice President pointed out that it would help in reducing costs and providing a stable income to farmers. It would also protect the consumers from the ill-effects of pesticides. As a matter of fact, only 10 per cent of water and electricity would be required for natural farming when compared normal farming, he added.

The Vice President also stressed the need to create awareness among farmers to diversify to allied activities to increase their incomes. A study has shown that there were no suicides by farmers who had diversified to allied activities like poultry, dairy and fisheries, he added.

Lauding the Prime Minister, Shri Narendra Modi for increasing the MSP for various crops and for launching farmer friendly schemes like soil health cards and PM Krishi Sinchayee Yojana, the Vice President also appealed to the private sector to step up investments in agriculture. Similarly Parliament, press, and Planning Commission (NITI Aayog) should give top priority to agriculture.

Observing that the Government, Parliament and the Media must accord the highest priority to health, education and agriculture, the Vice President said that scientists, agricultural research centres and Krishi Vigyan Kendras must make concerted efforts to make agriculture sustainable and profitable.

The former Minister for Health and Medical Education, Andhra Pradesh, Dr. Kamineni Srinivas, eminent Gastroenterologist and the Chairman, Asian Institute of Gastroenterology, Dr. D. Nageshwar Reddy and other dignitaries were present on the occasion.