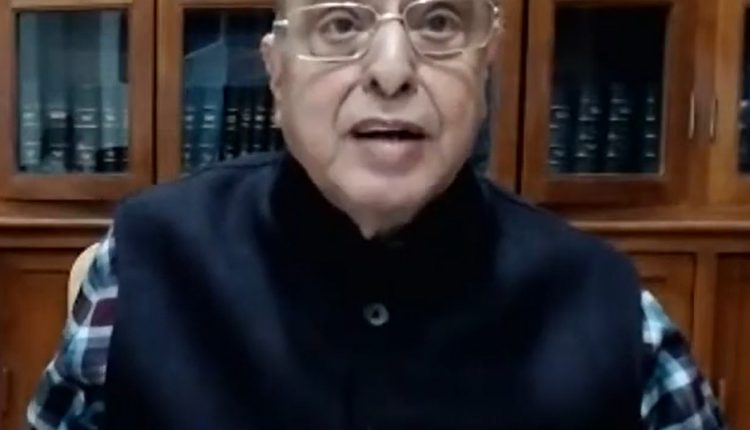 Creating a scientific temper among the citizens is as important as creating a vibrant and efficient society: Dr. K. Kasturirangan, former Chairman ISRO and Chairman of the National Education Policy (NEP) committee

Speaking on the occasion he said, he was happy to note that the society was founded by Dr. K.V. Rao, who worked for in the Department of Mines in the Nizam State and later in the Geological Survey of India, one of the oldest scientific organizations in the country.

It is interesting to note that Dr. K. V. Rao Scientific Society was formed in 2001 with a view to promote and popularise science, particularly among school children and enthuse and support young scientists in pursuit of their scientific activities said Dr. K. Kasturirangan.

The Mobile Science Lab initiative of Dr KV Rao Society is is going to be equally innovative and exciting he said.

The KV Rao Scientific Society had embarked on its journey of science promotion and popularization since 2001 and has been involved in encouragement of child scientists and of young scientists in pursuit of science and research. More than 25000 students got benefitted from its activities in the past 21 years. It will impact 5000 students each year in the coming years,

The Society completed 21 years of service to science. Spotting the talent and recognizing it has been the main focus of KVRSS for many years. However, in the last couple of years, recognizing the importance of mentoring, KVRSS has started activities in this direction also. The initiative was given an impetus with a couple of funding agencies coming forward to support two activities, (i) a Science Innovation Lab by Electronic Arts (EA) Hyderabad. The Innovation lab is now well equipped and ready to be used and was inaugurated on 31st by the esteemed Guest, Dr. K. Kasturirangan. (ii) a Mobile Science Lab funded by Orange County Community Fund, (OCCF) California. The mobile science lab development is under progress and we plan to commission it in a couple of months.

1st SMART (Science Meets ART) Awards: To celebrate the National Science Day and to let school students visualize science, a competition of drawing/ painting was conducted. A record 662 students from various schools across India participated of which 5 were selected for awards

10th SPARK Innovation Awards: This event is organized to stimulate the young minds of India, We received 285 projects from various schools across 19 states of India of which 40 were selected for final presentations held online. A panel of eminent scientists and science teachers judged the projects by the students. The winners and runners were given cash awards, and certificates.

21stAnnual Research Awards: To encourage research in basic sciences the Society has instituted these awards in the broad fields of Bhoutikam, Rasayanam, Jeevanamand Ganitam. Students below the age of 30 years and actively involved in research in various states of India are given awards. This year the event was open to students from across India and 212 students participated from 22 states of India. 12 students, 3 each category received the awards

Project Title: “Regularity of powers of quadratic sequences with applications to binomial ideals”

Project Title: “The (n, ϵ)-pseudospectrum of an element of a Banach algebra”

Project Title: “Mechanism of DNA cleavage by the endonuclease SauUSI – a major barrier to horizontal gene transfer and antibiotic resistance in Staphylococcus aureus”

Though the year 2020-21 has been globally stressful, KVRSS converted its programmes online and not only managed to conduct most of them, but the events were conducted for students across India. The response has been great and record number of students participated in the events