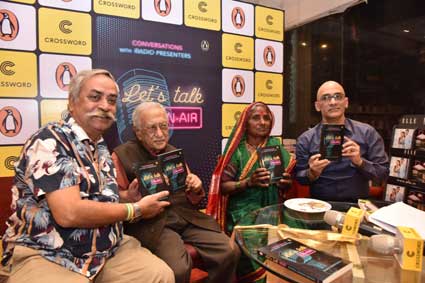 New Delhi: As the world celebrated World Radio Day, Crossword Bookstores and Penguin Random House India launched Rakesh Anand Bakshi’s new book, Let’s Talk On-Air, at Crossword Bookstores, Kemps Corner.
The book was officially unveiled by Padma Shri Piyush Pandey and the esteemed radio announcer Ameen Sayani.
The United Nations declared the theme of ‘Dialogue, Tolerance and Peace’ this World Radio Day, in order to celebrate the impact the radios have made in pursuit of a peaceful and tolerant world.
Speaking on the occasion, Maulik Desai, Head, Crossword Bookstores says, “It was an honour and a privilege to have two Padma Shri awardees inaugurate Rakesh Anand Bakshi’s book. The radio, for years, has had a common goal of spreading awareness relevant to current events to its listeners, irrespective of their background. We all know about one of the oldest forms of communications but not the faces behind them- Let’s Talk On-Air pens down the journey of the 14 most iconic RJs India has seen.”
Let’s Talk On-Air chalks out the unique stories of the famous radio presenters, their setbacks, favourite songs, inspirations, moments and principles.
Talking about his love for radio and the book, Rakesh Anand Bakshi said, “I found radio presenters to be really interesting people, with stories to tell of themselves and their listeners; I was fascinated by their charming profession and wondered: How did these radio presenters arrive at this profession? Did they all become presenters solely because they loved the songs they played? Or was it because they liked to talk to people? What does it really take to become a radio presenter? I thought many dedicated radio listeners would like to know how their favourite presenters started their journeys.”
Also present at the launch was Kerabai Sargar from Mann Deshi Tarang, a community radio based in Satara- Mhaswad, on who Bakshi writes, “She composes her songs and sings in a bold voice that mesmerizes the listeners.”
Honoured and elated at her presence, Bakshi said, “She covers topics like water conservation, and female infanticide in Satara.”
Gaurav Srivastav from Radio City 911 FM, Anita Naidu Pawaskar from Radio One 94.3, Apurva Jhadav from Radio City 91.1 FM, Siddharth Mishra from Big 92.7 FM. are some of the RJs mentioned in the book who were also present.
Ameen Sayani spoke on his journey as a radio presenter and started with the iconic and familiar beheno aur bhaiyo- “I have had a lot of successes in my life but all these successes have been filled with so many setbacks and failures which you will see through my articles and books. But the important thing is to look at all the successes!”

Tapping the potential of Indian artists in Web3, Tezos India kicks off its Art & Culture initiative