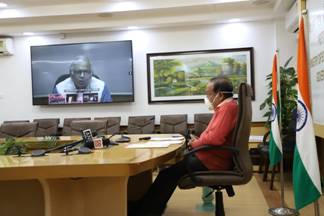 New Delhi: Union Minister Health & Family Welfare, Science and Technology and Earth Sciences and Vice President CSIR, Dr. Harsh Vardhan today said,”CSIR- Central Drug Research Institute(CDRI) has championed the cause of affordable drugs and has given the world breakthrough molecules like Centchroman (first non-steroidal oral contraceptive) and Arteether (lifesaving drug for cerebral malaria) amongst others. He was addressing the 70th Annual Day celebrations of CSIR-CDRI, Lucknow through video-conferencing in New Delhi today. “The contribution of the Institute has been immense, not only in terms of drugs it gave to human kind but also in terms of quality fundamental research and human resource development”, he said.

Congratulating the scientists of the Institute on the occasion, Dr. Harsh Vardhan highlighted that CSIR-CDRI with its talented team, participated in the fight against COVID-19 through its multi-pronged approach. The Minister informed, “As of today, 90 lakh doses of vaccines have been administered in India, and we are supplying vaccines to 23 countries and 40 countries in all have requested the vaccine”. He said, “The institute established COVID testing laboratory within a record time of two months and took complete charge of testing from two districts of the state of Uttar Pradesh. The scientists also started testing of repurposed drug Umifenovir and received approval from DCG(I) for conducting clinical trials on the molecule”. “Making the best use of its infrastructure and expertise the institute also carried out genome sequencing studies and sequenced 200 samples from Uttar Pradesh”, he pointed out.

The Minister added that the Indian scientists are taking forward the vision of the Prime Minister in building an AtmaNirbhar Bharat and a New India. CSIR will be remembered in history for developing Feluda test and a large number of other innovations during the Covid pandemic and our Prime Minister has always strongly supported the idea of creating an eco-system of innovations, the Minister explained. Dr Harsh Vardhan urged the scientist community to focus on bringing benefits to common man through their research.

In his opening remark, Director CSIR-CDRI, Professor Tapas Kundu briefed about the achievements of Institute in the reporting year. He highlighted that in terms of measurable performance, the Institute has made, significant accomplishments in the year 2020. As per the provisional data, a total of 218 research papers have been published by the Institute researchers with an average impact factor of 3.66. The Institute has filed 8 patents in India and has been granted 5 foreign patents and 8 Indian patents. A total of 42 PhD scholars submitted their thesis and 15 aspirants have received post-graduate training. During the year, Institute has also initiated a total of 22 externally funded projects including 2 industry sponsored projects and 2 consultancy projects.

(2) To establish and operate a Unit for GLP-compliant Pre-clinical and Clinical Bioanalysis (PK, BA, BE) and Drug Testing (DTL). It will be helpful for Clinical Trial Centers, Pharma Industry, MSME and Academia for advance research.

On this occasion, a new technology developed by the research team of Dr Atul Goel, for Fluorescent Dyes (CDRI-KD1, CDRI-KD1Az3) and Quenchers (CDRI-KQ3, CDRI-KQ4) for the development of RT-PCR based diagnostic kitswas transferred to M/s Biotech Desk Pvt. Ltd. (BDPL), Hyderabad. The Director, Professor Tapas Kumar Kundu said that this technology of fluorescent dyes and quenchers will not only furnish the indigenous COVID testing kit but also it is on the path of the government initiatives towards ‘Atmanirbhar Bharat’.

Later, the 46th Sir Edward Mellanby Memorial Oration was delivered by Dr Shekhar C Mande on “Dealing with Infectious Diseases”. His oration was focused on ways to counter infectious diseases with new approaches.The complexity of the problem of disease prevention can be better addressed if we can integrate evolutionary biology with traditional biomedical research, he said.