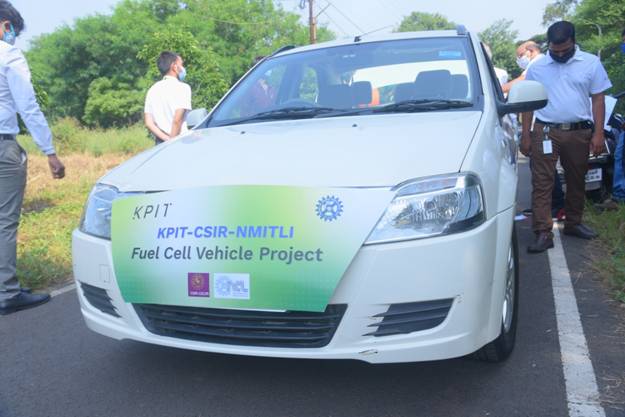 In 2016, CSIR-NCL and CSIR-CECRI as part of the Industry Originated Project (IOP) category of the New Millennium Indian Technology Leadership Initiative (NMITLI) scheme partnered with KPIT for the development of an automotive grade PEM Fuel Cell technology. Hydrogen Fuel Cell (HFC) technology uses chemical reactions between hydrogen and oxygen (from air) to generate electrical energy, eliminating the use of fossil fuels. Further, the fuel cell technology emits only water, thus cutting down the emission of harmful greenhouse gases along with other air pollutants. The technology, with further adoption and use, is poised to make the world a cleaner place with reduced air pollution levels.

The trials were run on a battery-electric passenger car platform retrofitted with the Fuel Cell Stack. However, it is expected that the technology is more suited for commercial vehicles (CV) such as buses and trucks. Battery electric buses/ trucks require a large battery to achieve the desired operating range. In comparison, HFC technology requires a much smaller battery for a very large operating range. Hence, HFC technology offers more promise for the CV segment.

The FC vehicle is fitted with a Type III commercial hydrogen tank. Its capacity is around 1.75 Kgs of H2 stored at about 350 bar pressure, the FC vehicle should run for approximately 250 Km range under typical Indian road conditions at moderate speed of 60-65 Km/hr. The entire fuel cell stack and its associated components with power train were retro-fitted in a standard 5-seater sedan car.

On this significant milestone, Mr. Ravi Pandit, Chairman, KPIT said, ” The technology has a great future and owing to its indigenous development, is expected to be more commercially viable than ever before. It is an important technology that will help India significantly reduce pollution and reduce our fossil fuel imports.”

Prof. Ashwini Kumar Nangia, Director, CSIR-NCL while congratulating the teams on their first successful car run on hydrogen fuel cell using indigenous CSIR-NMITLI technology and KPIT as industry partner stated that, “the time has come for renewable energy based on hydrogen as fuel to power transportation in the country. This will not only reduce the petrol, diesel import bill but hydrogen is the cleanest fuel with water as the only by-product. A long term investment of CSIR under NMITLI in a niche energy area has come to fruition.”

Nobel Peace Prize to WFP will inspire an intensification of efforts to ensure that nobody is left to die of hunger anywhere: Dalai Lama