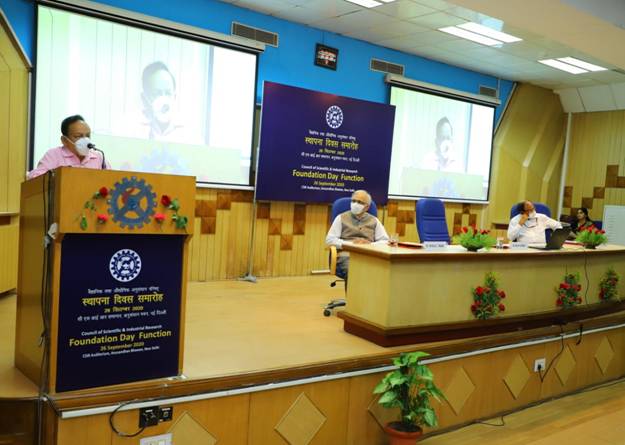 “CSIR labs have made commendable efforts to deal with challenges of Covid pandemic”: Dr Harsh Vardhan

The Minister appreciated the work done by entire CSIR during this current Covid-19 crisis. He said under the times of needs CSIR labs have risen to the occasion and delivered diagnostics, drugs and ventilators among many others. Dr Harsh Vardhan also released a digital book and a short film on the CSIR’s COVID-19 efforts, which highlighted the people behind the various initiatives of CSIR in its fight against Covid-19.

In his address, Dr Harsh Vardhan stated that the pandemicposed unprecedented difficulties and some extreme challenges, and expressed happiness that CSIR converted challenges into opportunities and for the first time in its history, all the laboratories of CSIR, irrespective of if it is aerospace or oceanography, leather or genomics, all the labs pooled their strengths, focussed their energies on one problem at hand, the COVID-19”. He said, “there was an infectious enthusiasm across to lab to cooperate and collaborate among the labs”. “The 5-verticals approach of CSIR that brought about inclusivity among all the labs, irrespective of the specialisation of the lab resulted in the creation of the 100 odd technologies that the CSIR labs came up with”, he added.

The Minister noted that “Be it drugs, vaccines, testing, sequencing, PPEs, hospital assistive devices, masks, sanitizers, disinfection systems, CSIR came up with quick and innovative solutions”. DR. Harsh Vardhan pointed out that “CSIR’s CCCMB was among the first labs to not only initiate testing in the country, but the Centre also trained a number of medical professionals to carry out the testing”. “Today, as you are aware testing counts have exponentially increased in the country”, he said.

Dr. Harsh Vardhan also said that “more than 2000 genomes have been sequenced at CSIR and they have developed tools for the analysis”. He said, “while CSIR did develop novel testing methods and diagnostics, synthesise low cost drugs like Favipiravir, drive vaccine trials, and so on, it also put together make-shift hospitals, one of which I inaugurated in Ghaziabad recently”.

To enable farmers transport and sell their produce without the help of middlemen, CSIR developed the hugely successful KisanSabha app and later the AarogyaPath App.

The Minister said, “CSIR has been the organisation that has always responded whenever the nation looked up to it in challenging situations. It has happened in the past and the rapid responsiveness has been ably demonstrated in the recent times as well”.

Dr Harsh Vardhan urged CSIR to brain storm and come up with roadmap and strategy for achieving ‘Atmanirbhar Bharat’ through S&T. He expressed happiness to see the innovativeness of the young school students and complimented all the Young Scientist Awardees, Technology Award Winners, CAIRD award winners.

Dr Shekhar Mande, in his address, highlighted that in March, CSIR identified the unmet needs, assessed its strengths and capabilities for addressing the pandemic and adopted a multi-pronged strategy of working on diagnostics, surveillance, drugs, hospital assistive devices, personal protective equipment and supply chain and logistics. This strategy is now beginning to yield exciting solutions.