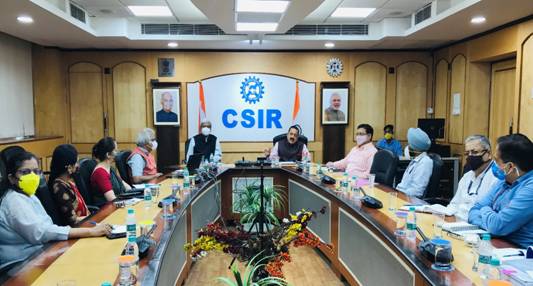 At a meeting of the CSIR attended by Prof K.VijayRaghavan, Principal Scientific Advisor, Dr.Shekhar Mande DG, CSIR and other Chief Scientists, Dr Jitendra Singh said that the Ministry of Jal Shakti, Govt. of India has entrusted the responsibility to CSIR-NGRI for mapping ground water sources in arid regions.

Referring to Prime Minister’s 75th Independence Day speech, where he said that in just two years of the Jal Jeevan Mission, more than four and a half crore families have started getting water from taps, Dr Jitendra Singh said that Government is promoting Science and Technology (S&T) with emphasis on emerging areas and their application for bringing “Ease of Living” for common man.

Dr Jitendra Singh said that Arid areas in the north western India spread over parts of states of Rajasthan, Gujarat, Haryana and Punjab cover nearly 12% of the total geographical area of the country and is home to more than 8 crore people. He said, with an annual rainfall in the range of less than 100 to 400 mm, this area faces acute shortage of water throughout the year and it is proposed to take up high resolution aquifer mapping and management to augment the groundwater resources.

Dr Jitendra Singh informed that this technique is cost-effective, precise and is useful to map large areas (districts/states) within a short time to map the vast extent of groundwater resources in arid regions of our country. The entire work will be completed by 2025 with more than 1.5 lakh square kilometers of area with an estimated cost of Rs. 141 Crores. He said, the ultimate aim of this project is to map the potential sites for groundwater withdrawal and conservation and results will be used to meet the broader objectives of aquifer mapping, rejuvenation and management of groundwater resources in the arid areas.

Union Minister for Women and Child Development Smriti Irani to chair the National Conference of States/UTs at Kevadiya, Gujarat