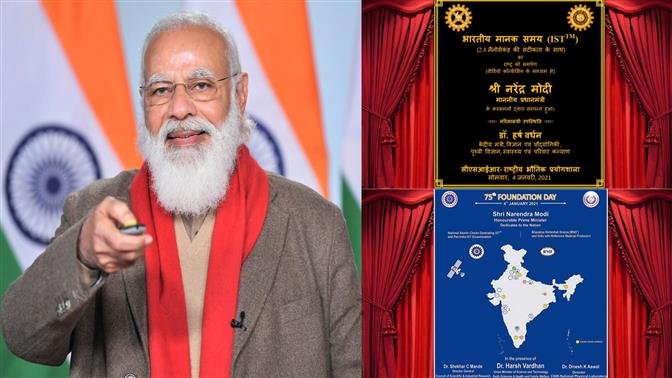 CSIR-NPL, New Delhi, is one of the few premier laboratories established under Council of Scientific and Industrial Research(CSIR)  before independence on January 04, 1947. As a beginning of the Platinum Jubilee year and to commemorate this special day as its NPL Foundation Day Celebrations, CSIR-NPL  organised a National Metrology Conclave  under the theme ‘Metrology for the Inclusive Growth of the Nation’. The theme of the conclave was ‘Metrology for the Inclusive Growth of the Nation’. Vice-President, CSIR and Union Minister of Science & Technology, Earth Sciences, and Health & Family Welfare, Dr Harsh Vardhan and Principal Scientific Advisor Dr Vijay Raghvan were present at the function.

Addressing at the inauguration,  the Prime Minister lauded the Indian scientists for successfully developing two Indian COVID vaccines. He said India’s Covid vaccination Program is the largest in the world and is about to be started. He lauded the scientific institutions in the country including CSIR for coming together to find solutions for every challenge faced by the country.

Shri Narendra Modi also dedicated National Atomic Timescale and Bhartiya NirdeshakDravyaPranali to the Nation and laid the Foundation Stone of National Environmental Standards Laboratory  through a video conference on the occasion.

The Prime Minister urged CSIR to interact with school students to raise awareness about the efforts of the institute. He said this would inspire and motivate them to become scientists in future. He praised CSIR NPL for having played an important role in the evolution and evaluation in the development of the country.

The Prime Minister remarked that as India’s timekeeper CSIR-NPL also has the responsibility to change the future of India. He said over the decades, India was dependent on foreign standards for quality and measurement. But now India’s pace, progress, rise, image, and strength of India will be decided by our own standards. He said metrology which is science of measuring also sets the foundation for any scientific achievement. No research can proceed without measurement. Even our achievement has to be measured on some scale. He said the credibility of the country in the world will be dependent on the reliability of its metrology. He said metrology is like a mirror showing us our standing in the world, the scope for improvement. He gave a call to remind that the goal to achieve a self reliant India consists of quantity as well as quality. He urged to win the hearts of every customer who purchases Indian products. He stressed to ensure that Made in India products not only meet global demand but also get global acceptance.

The Prime Minister pointed out, historically, any country has progressed in direct correlation to its effort to promote science. He termed this ‘value creation cycle’ of Science, Technology and Industry. Explaining further, the Prime Minister said that a scientific invention creates a technology and technology leads to industry development. Industry, in turn, invests further in science for new research. This cycle keeps on taking us in the direction of new possibilities. CSIR-NPL has played a major role in taking forward this value cycle, the Prime Minister added.

This value creation cycle of science to mass creation has become all the more important in today’s world when the country is moving forward with the goal of Atmanirbhar India. CSIR will have to play its role in this.

Please click here for the full text of PM’s speech.

In his address, Dr. Harsh Vardhan congratulated the National Physical Laboratory as well as CSIR on the occasion and said, “The expertise found within the many science laboratories of India is driving the ground-breaking research and development and is a key force in helping our country become a leading science superpower”.He stated, “The scientific community has been the most prominent in the last one year…….The Herculean efforts made by our scientists have finally paid off.” The Minister said, “Today, we have several vaccines that have been developed across the world, two of which have been developed at a record-breaking speed and granted authorization in India”.  He pointed out, “It has all been possible due to the exemplary and collaborative efforts of scientists across the world, it has been an extraordinary level of sharing of science and its knowledge”.

The Minister expressed his belief, “Our scientists can give us game-changing ideas and the opportunities that can be harnessed to boost our industry, create new jobs, and make a real difference in everyday life”.”Science can be the biggest equalizer. It can ensure that the poorest man leads a comfortable life with just simple ideas and innovations. That’s what I want you all to do”, DR Harshvardhan explained.

CSIR-NPL which is the National Metrology Institute (NMI) of India; Member of the General Conference of Weight and Measures (CGPM), BIPM an International Intergovernmental organisation constituted by diplomatic treaty i.e. ‘The Metre Convention’; and Founder Member of the Global Regional Metrology Organisation i.e., Asia Pacific Metrology Program (APMP), has the mandate to realize, establish, upgrade, maintain and disseminate the measurement standards by Act of Parliament.

Dr. Harsh Vardhan released a Book titled “Metrology for Inclusive Growth of India”, edited by Dr. D.K. Aswaland contributed by CSIR-NPL’s Scientists. This book signifies the role of metrology for inclusive growth in India and describes various metrological applications. He also releases a “Thesaurus of NPL” on the occasion.

On the occasion of CSIR-NPL entering its platinum jubilee celebrations, a series of events have been organised with world science leaders.More than 50 thousand participants joined through online which includes several Metrologists, Industrialists, Regulators, Policy Makers, academicians and students. Several other dignitaries from all over the world are also participating in the event to commemorate the 75th Foundation day of this premier laboratory. A technical session on the theme ‘Metrology for Inclusive Growth of the Country’, was chaired by Prof A. K. Grover, Chairman, Research Council, CSIR-NPL. Talks and technical deliberations by  Directors of BIPM and Directors / Science Leaders of various other NMIs (Germany, UK, Japan, South Africa, Australia and India)  are some of the other highlights of the Conclave.