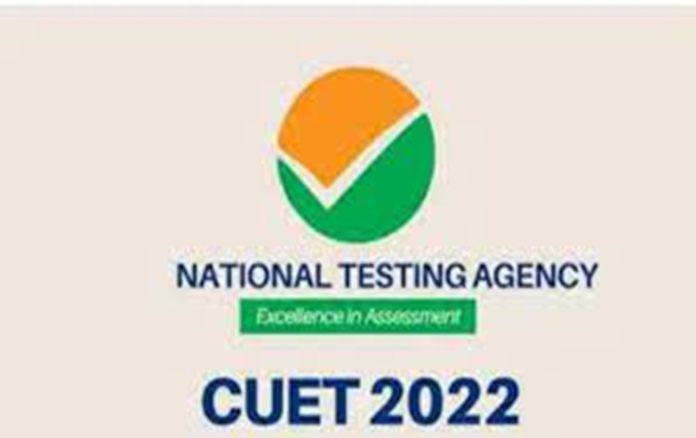 New Delhi: The National Testing Agency NTA has said that the Common University Entrance Test CUET-UG scheduled today was postponed at a few centres across 17 states due to administrative and technical reasons.

The NTA in a statement said, the test (first shift)will be held on the 12th of this month for a few examination Centres. The centres are Namsai and Pasighat in Arunachal Pradesh, Nalbari in Assam, Bilaspur in Chhattisgarh, New Delhi, Ambala in Haryana, Bokaro, Giridih, Jamshedpur and Ramgarh in Jharkhand, Leh in Union Territory of Ladakh, Sagar in Madhya Pradesh, Aurangabad, Raigad, Satara and Wardha in Maharashtra, Koraput in Odisha, Karaikal in Puducherry, Jodhpur in Rajasthan, Coimbatore, Dindigul, Tiruvarur, Viluppuram and Virudhunagar in Tamil Nadu, Agartala in Tripura, Noida and Varanasi in Uttar Pradesh, Pauri-Garhwal in Uttarakhand and Hooghly in West Bengal.

NTA said, because of technical reasons, the question paper for the second shift of the examination could only be uploaded at 5 pm and the download at 489 centres could start at 5:25 pm, while the exam was scheduled to begin from 3 pm. It said, reports were asked from the observers and city coordinators on the ground.

NTA said, based on their recommendations, that the second shift scheduled today is cancelled and the same will now be conducted between the 12th to 14th of this month. It said, the same Admit Card will be valid for the concerned candidates whose examinations have been postponed. In case, the 12th to 14th of August is not suitable, the candidates can send an e-mail to
datechange@nta.ac.in
mentioning their desired date and roll number. Meanwhile, the candidates have also been advised to be in touch with the NTA website
www.nta.ac.in
and
cuet.samarth.ac.in
for the latest updates regarding the examination.

National Testing Agency is conducting Common University Entrance Test CUET (UG) – 2022 from 15th July to 20th August excluding the days of other undergraduate Examinations and gazetted holidays at 489 Examination Centres located in approximately 259 cities across India and 09 cities outside India.

University of California, Los Angeles: With $12 million in federal funding,...