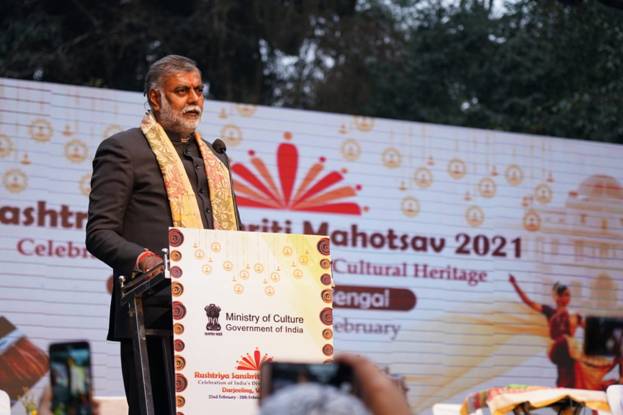 Speaking on the occasion Shri Patel said, “The unexplored talent of local artists needs to be showcased through a platform and the Central Government has taken this initiative of RashtriyaSanskritiMahotsav to showcase the awe-inspiring talent of our artists.” Shri Patel added that RSM gives us a chance to connect with the different arts and cultures of India and represents in Unity in Diversity which epitomises our country.

The Culture Minister highlighted the importance of Culture for the youth and how it can engage gainfully the young artists from various areas including rural areas.

On second day, there will be a RabindraSangeet recital by SounakChattopadhyay, a creative dance recital by Saphire Dance troupe, the North eastern band of Daniel Engti and Kamran and the Boyz Band. Last day will begin with Bail songs by AnuttamBaul, followed by Kathak Ballet by SanskritiSreyaskar and a dance drama.

On all days local artistes will be given an opportunity to perform on the RSM stage.20 crafts stalls from all over the country showcasing genuine hand-crafted products have also been set up.

RashtriyaSanskritiMahotsav, the flagship festival of Culture Ministry organized since 2015 with the active participation of Seven Zonal Culture Centres has been playing a pivotal role to take the vibrant culture of India out to the masses instead of confining to auditoria and galleries. It has been instrumental in showcasing, folk and tribal art, dance, music, cuisines & culture of one state in other states reinforcing the cherished goal of “Ek Bharat Shreshtha Bharat” and at the same time providing an effective platform to the artists and artisans to support their livelihood. Ten editions of RSM have been held till date since November, 2015 in various states and cities such as Delhi, Varanasi, Bengaluru, Tawang, Gujarat, Karnataka, Tehri and Madhya Pradesh.

Renowned artists including local artists will be a part of this major festival. The RashtriyaSanskriti Mahotsav-2021 will cover a profusion of folk-art forms and it would offer the chance to experience the best in established and emerging virtuosity. The RSM will reconnect the people, especially the youth, with their indigenous culture, its multi-faceted nature, magnificence, opulence and historical importance in the context of India as a Nation over the millennia.

Arth Commences Its Third Edition At The Culture Capital Of India, Kolkata