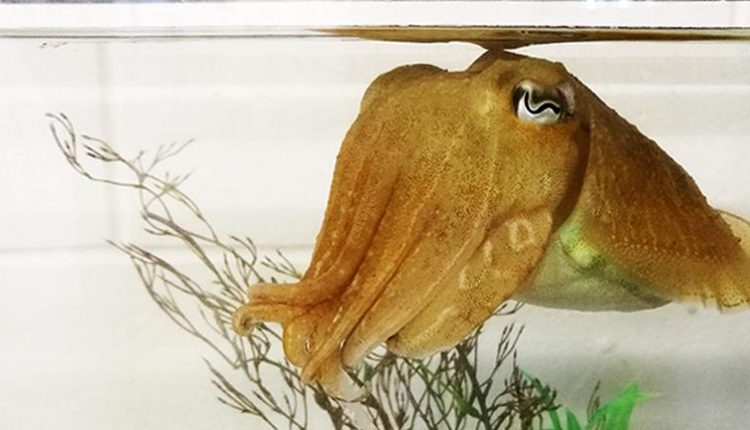 A study has found that cuttlefish can pass a fishy version of the ‘marshmallow test’ – and those that can delay gratification the longest are the most intelligent.

It was quite astonishing that the cuttlefish could wait for over two minutes for a better snack. Why would a fast-growing animal with an average life-span of less than two years be a picky eater?

The results, published today in the journal Proceedings of the Royal Society B, provide the first evidence of a link between self-control and intelligence in a non-primate species.

To conduct the experiment, common cuttlefish (Sepia officinalis) in tanks were presented with two foods they commonly eat, each in a separate Perspex chamber. In one chamber was a piece of king prawn, which they could eat immediately. In the other was a live grass shrimp, their preferred food, but they could only have the shrimp if they waited and didn’t eat the prawn.

“It was quite astonishing that the cuttlefish could wait for over two minutes for a better snack. Why would a fast-growing animal with an average life-span of less than two years be a picky eater?” said Dr Alexandra Schnell in the University of Cambridge’s Department of Psychology, first author of the paper.

The learning ability of each cuttlefish was then tested in a different task. A dark grey marker and a white marker were placed in random positions in the tank. After learning to associate one colour with a reward, the reward was switched to be associated with the other colour. The cuttlefish that were both quicker to learn the association and quicker to realise the switch were the same ones showing more self-control in the first task.

“We found that cuttlefish with better learning performance – an indicator of intelligence – also showed better self-control. This link exists in humans and chimpanzees, but this is the first time it has been shown in a non-primate species,” said Schnell.

The researchers suggest that self-control in cuttlefish is the by-product of another behaviour: staying camouflaged on the sea bed for long periods of time to avoid predators. These periods are punctuated by brief foraging bouts in the open. Self-control may help the cuttlefish optimise their foraging by only striking prey of better quality.

“The ability to exert self-control is an important element of the ability to plan for the future, which is quite a sophisticated behaviour,” said Professor Nicola Clayton FRS in Cambridge’s Department of Psychology, senior author of the report.

She added: “Self-control requires an understanding that ‘less is sometimes more’ – that avoiding temptation now might lead to a better future outcome. This is a critically important building block for the evolution of complex decision-making.”

The researchers also noticed that the cuttlefish in the self-control task turned their bodies away from the immediately available food, as if to distract themselves from eating it.

Self-control – the ability to resist temptation in favour of a better but delayed reward – is a vital skill that underpins effective decision-making, goal-directed behaviour and future planning. Amongst animals, apes and their clever feathered cousins, the corvids and parrots, have relatively high self-control when it comes to eating. Rats, chickens and pigeons find it much more difficult not to eat food immediately.

The experiments were conducted with collaborators including Professor Roger Hanlon at the Marine Biological Laboratory in Woods Hole, Massachusetts. Their design was inspired by the 1972 Stanford marshmallow test, in which children were offered a choice between one marshmallow immediately, or two if they waited for a period of time.

Two additional cuttlefish were recruited to the study but refused to take part.

This research was funded by the Royal Society.