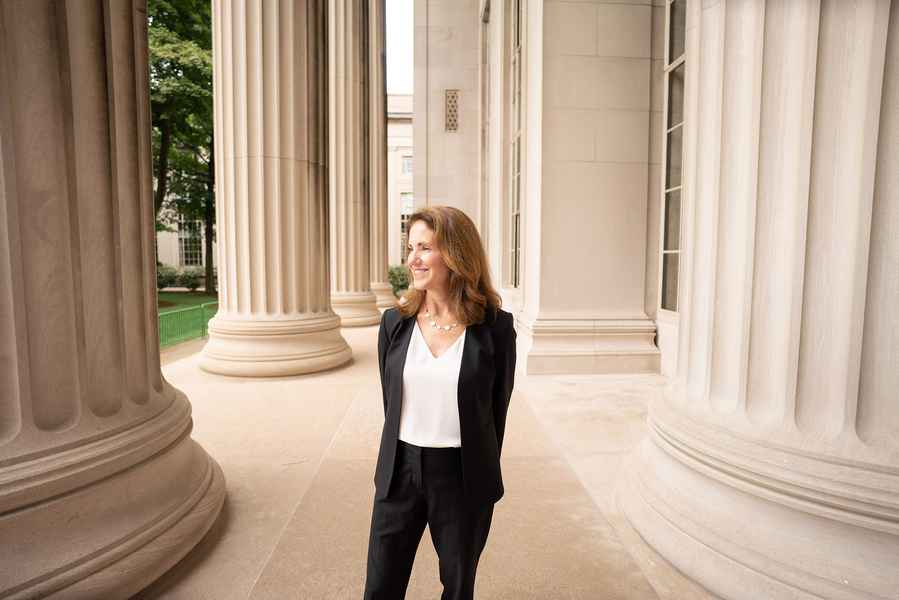 Cynthia Barnhart SM ’86, PhD ’88 will step down from her role as chancellor and return to the faculty on July 1, President L. Rafael Reif announced today in an email to the MIT community.

During her seven years at the post, Barnhart and her team took a range of actions to make MIT a more caring environment where support is easier to find. She oversaw an expansion of student health and wellness programs, launched a campaign to prevent and respond to sexual misconduct on campus, and focused on new efforts to enhance undergraduate and graduate education.

“From the start, she has been a fearless advocate for student wellbeing, a calm, insistent force for new thinking and creative change, and one of my most trusted and thoughtful advisors,” Reif wrote to the community.

MIT’s chancellor is broadly responsible for student life and learning at MIT. Along with the provost she also advises the president on graduate and undergraduate education, and participates in strategic planning, faculty appointments, resource development, and campus planning.

“I’m so grateful to have had the opportunity to serve in this role,” Barnhart says. “It was especially enriching to be exposed to diverse perspectives across the Institute and to engage with so many members of our community. I’m proud that our efforts around student well-being, support, and success have made a difference and will continue into the future.”

Barnhart joined the MIT faculty in 1992 and is the Ford Foundation Professor of Engineering. Before becoming chancellor she served as associate and acting dean of the School of Engineering and co-directed the Operations Research Center and the Center for Transportation and Logistics.

In 2014, just days into her tenure as chancellor, the issue of sexual assault shot to the top of her list of priorities, following the publication of a letter in The Tech written by a rape survivor. Charged by President Reif to take action to combat sexual assault at MIT, Barnhart and her team conducted a landmark survey of MIT students and their experiences regarding unwanted sexual behavior, and publicly released the results.

The Office of the Chancellor then took numerous measures to provide more education to students about support resources, reporting options, and how to challenge harmful attitudes and behaviors. To meet students’ needs, Barnhart also bolstered staffing for a variety of offices and services related to student support, mental health and counseling, and violence prevention. Through further surveys, trainings, forums, campaigns, and other efforts, she encouraged members of the MIT community to become part of the solution.

“I have had the privilege of working with Cindy on so many important issues to support students,” says Vice President and General Counsel Mark DiVincenzo. “Her ability to listen, empathize, collaborate, and create solutions is a model for true effective leadership. Cindy’s impact on the student experience — especially in leading the Institute’s commitment to the prevention of sexual misconduct and to an encouraging and responsible approach to concerns raised — is no less than profound.”

Barnhart also created the Title IX and Bias Response Office, which would later be expanded to become the Institute Discrimination and Harassment Response Office, serving as MIT’s central resource for students, faculty, and staff with concerns related to discrimination, discriminatory harassment, and bias. And, she oversaw the implementation of a new policy and reporting system regarding complaints of sexual misconduct against faculty and staff.

Many of these actions flowed in part from a set of recommendations from four working groups of faculty, students, postdocs, and staff, convened by President Reif in response to a 2018 National Academies report co-authored by Institute Professor Sheila Widnall. The report found that sexual harassment of women in the STEM fields causes significant damage to research integrity and a costly loss of talent.

“The solution to getting started on these difficult issues is leadership,” says Widnall, now emerita, who served with Barnhart on a presidential advisory board that partnered with the four working groups. “As Chancellor, Cindy has embodied that leadership, steadfastly engaging with the MIT community to answer the National Academies’ call and strengthen ongoing efforts to prevent and respond to sexual misconduct at the Institute. With her commitment to diversity, values, and excellence, she has helped bring the MIT community together.”

Barnhart has also made student mental health a top priority at MIT, both expanding support services and encouraging students who are feeling overwhelmed to ask for help.

At the same time, the Chancellor’s office and MIT Medical expanded staffing, hours, and volunteer training for other mental health, student support, and counseling services. Subsequent efforts have included revamping the Institute’s policies on withdrawal and readmissions and medical leave and hospitalization, among other things.

In 2015, with William Kettyle, then-director of MIT Medical, and Professor Rosalind Picard as founding faculty chair, Barnhart established the MindHandHeart initiative, expanding MIT’s “mens et manus” (mind and hand) motto to recognize the importance of well-being, self-care, and taking care of others.

Maryanne Kirkbride, the executive administrator of MindHandHeart, remembers: “With the chancellor’s leadership and in partnership with the Undergraduate Association and Graduate Student Council, we engaged 150 community members in a series of working groups to advance connectedness, well-being, life skills, and academic achievement. The outcomes served to advance norms and practices in our culture that increase resiliency, better prepare us for success, and strengthen our feeling of community.”

Since its launch, the MindHandHeart Community Innovation Fund has supported 215 projects, including Random Acts of Kindness Week, the Puppy Lab, and Fail!, an initiative aiming to destigmatize failure in academia.

“Cindy had the vision to see how community members could come together for one another to create a climate more supportive of our mental health and well-being,” Kirkbride says.

Innovating in education and learning

Student learning has also been a top priority area in the Office of the Chancellor. In 2017 Barnhart created the Office of the Vice Chancellor, integrating the offices for graduate and undergraduate education. She appointed Ian Waitz as vice chancellor and charged him working alongside students, faculty, and staff from across the Institute to enhance the student academic experience in such areas as the first-year experience, advising, and professional development.

MIT Admissions, also under Barnhart’s purview, has continued to increase the excellence and diversity of each incoming class. Barnhart prioritized keeping an MIT education affordable and accessible, and worked in partnership with Provost Martin Schmidt and others to increase MIT’s financial aid budget.

Recently, “Team Chancellor,” as Barnhart calls it, has played a central role in MIT’s response to the Covid-19 pandemic, working to keep students safe and supported. Barnhart has led the Covid Decision Team, the group of senior officers overseeing Covid-related policy and planning decisions and response efforts. She says this operation’s success is due in large part to existing partnerships between the Chancellor’s Office and other MIT units.

“We had a strong collaborative foundation to work from,” Barnhart says. MIT staff and faculty involved in this effort are “amazing,” she says, and their work has ensured that “students know who they can go to for help, which means more help will be given.”

“This past year has been a rollercoaster, which has truly tested the strength of leadership at the Institute. Chancellor Barnhart rose to the challenge and worked to prioritize the needs of students in the important decisions made during the pandemic,” says junior and Undergraduate Association President Danielle Geathers. “Personally, I have found Chancellor Barnhart to be accessible, empathetic and committed to the well-being of our students. During this unprecedented year of Covid-19, Chancellor Barnhart’s authenticity and eagerness to listen enabled our development and success as a community. I predict that the legacy of her leadership during this turbulent time will revolutionize student and administrator relationships for years to come.”

After she steps down, Barnhart will take a sabbatical and then return to her MIT research and teaching. “I take these roles [as chancellor and previously as acting dean] in part because I feel it’s important that everyone contribute their service to MIT. But, at the same time, I’m really excited about having the time to dive back into research, teaching, and advising, as a professor.”