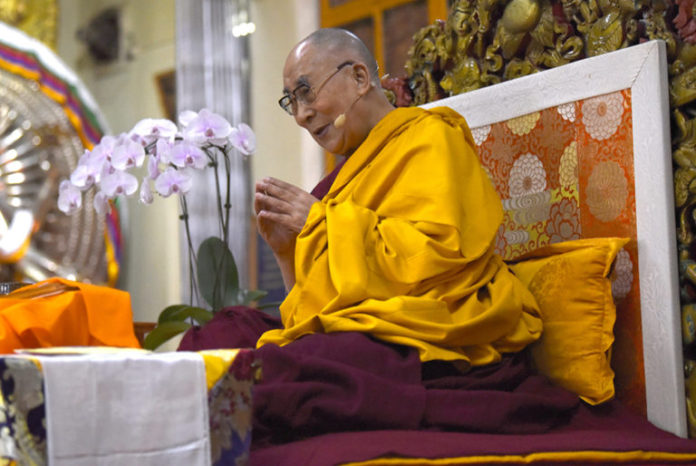 Dharmshala: Tibetan Spiritual Leader Dalai Lama began his first day teaching on the discourse of Chandrakirti’s “Entering into the Middle Way” today as per requested by Taiwanese Buddhists at the Main Tibetan Temple in Dharamshala.

Dalai Lama will continue his teachings for the next three days.

Around 6900 people from 67 countries attended the teachings today.

While blessing the Taiwanese Buddhist monks, His Holiness conveyed to give some introductory teaching to Buddhism before he begins the main discourse as many would be attending the teaching for the first time.

“In the teaching of the Buddha, it is said that not committing any non virtues and cultivating the wealth of virtue by thoroughly taming your mind is the true essence of the Buddha’s teaching” asserted His Holiness the Dalai Lama.

His Holiness further asserted that all the religious traditions of the world teach not to harm others, to have kind heart. In order to do so, one should learn how to tame the mind, and different religious traditions have their own practice of taming the mind but eventually, the over arching message of all different religions is helping others, being altruistic and not harming others.

In Buddhism, His Holiness affirmed that the practice of taming mind is to familiarise oneself with the concept of reality through the practice of meditation and Buddhism helps human beings by showing the reality of how things are.

“The causes of sufferings which are those of the afflicted mental afflictions, toxic emotions and those who have been in negative karmas are not washed away by the Buddha nor do the Buddha give blessing to us by removing our suffering.” attested His Holiness.

His Holiness cited a quotation from Dharmata particularly with regard to the concept of ‘reality as it is’ where His Holiness affirmed, reality could refer to the reality of the variety of things as well as how they are.

Further continuing his introductory teaching, His Holiness declared that different religious traditions already existed in India during Buddhas time where teachings of Psychology already existed. They were paraticularly interested in the knowledge of past life because of people having memory of past life. Those scholars were aware that recollections of past life doesn’t mean our physical body get reversed between the past and the present However, they did find out that something from the past is carried forward in the next life. Therefore, they began to identify this phenomena as ‘Self Atman’.

His Holiness reiterated that those religious traditions believed in separate self apart from the psycho physical aggregates. They asserted self as the single, permanent and autonomous. And with regard to taming the mind, they engaged in teachings of the ethic of morality on the basis of which, they exercised the practises of concentration.

Pertaining to the practice of concentration, His Holiness mentioned that there are desire realm and formless realm of which the desire realm is considered to be more problematic while the form less realm is regarded as more subtle and peaceful. Therefore, practitioners in ancient India encouraged meditation to develop those subtle realms to achieve peaceful state of mind.

“Such practice of concentration preceded before Buddha and Buddha followed those practices after renouncing his kingdom” claimed His Holiness the Dalai Lama.

After presenting a brief introductory teaching, His Holiness began his course of the main teaching on Chandrakriti’s “Entering into the Middle Way”

UC San Diego: Successful Women Make the Best Advocates to Help Other Women Rise up in the Ranks