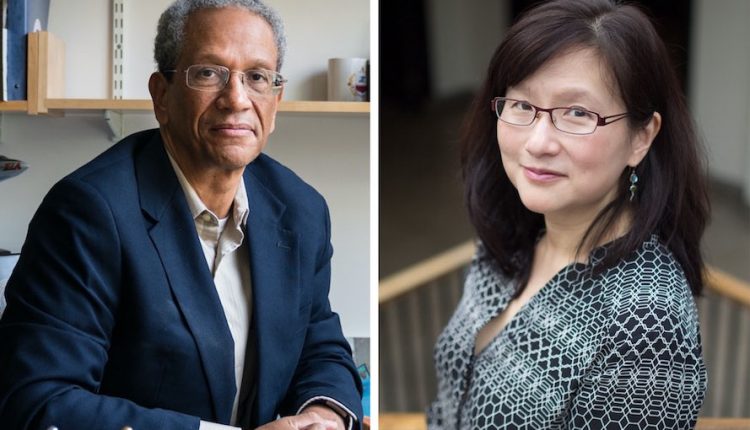 Faculty members will help to advance educational initiatives and strategy within the MIT School of Engineering.

Hastings is the Cecil and Ida Green Education Professor of Aeronautics and Astronautics, and head of the Department of Aeronautics and Astronautics, a role which he will continue in addition to his associate dean appointment. He will focus on advancing diversity, equity, and inclusion initiatives across the school and in collaboration with Nandi Bynoe, the School of Engineering’s Assistant Dean for Diversity, Equity and Inclusion, and the diversity officers within the school’s departments. As the current faculty lead of the School of Engineering’s DEI Committee, Hastings is already working with colleagues to ensure continued progress toward a diverse, equitable, and inclusive environment at all levels across the school.

Yang is the Gail E. Kendall Professor of Mechanical Engineering, faculty director for academics in the MIT D-Lab, and founder and director of MIT’s Ideation Lab. In her role as associate dean of engineering, she will focus on bolstering undergraduate and graduate academic programming and contributing to strategic initiatives at the school and Institute levels such as design, improving student experiences, and advancing opportunities for faculty support and mentoring, work that she has already begun through past and present department and Institute appointments.

“Maria and Dan have made incredible contributions to engineering education, and their individual and combined service to the school and the institute has been exceptional,” says Anantha Chandrakasan, dean of the School of Engineering and Vannevar Bush Professor of Electrical Engineering and Computer Science. “I am thrilled they have joined our leadership team, and I look forward to working closely with them each in these new roles.”

Hastings first joined the MIT community as a graduate student in 1976, after receiving his bachelor’s degree from Oxford University. He received his MS (1978) and PhD (1980) degrees in aeronautics and astronautics from MIT. He joined the MIT faculty in 1985.

Hastings’ contributions to MIT have been tremendous. He served as MIT’s dean of undergraduate education from 2006 to 2013, and in 2014, was appointed to a five-year term as the director of SMART, the Singapore-MIT Alliance for Research and Technology. He was appointed head of the Department of Aeronautics and Astronautics in 2018. In 2021, Hastings was appointed co-chair of MIT’s Values Statement Committee, a charge from Provost Martin Schmidt and former Chancellor Cynthia Barnhart, to engage the MIT community in the foundational work of developing a statement of shared values, one that is grounded in universal ideals but also speaks to MIT’s distinctive character and culture.

Hastings has had an active career of service outside of MIT, and from 1997 to 1999, served as chief scientist of the United States Air Force. In this role, he was the chief scientific adviser to the chief of staff and the secretary and provided assessments on a wide range of scientific and technical issues affecting the Air Force mission.

In recognition for his service and his many contributions to aeronautics and astronautics research, Hastings has received numerous honors including: the Losey Atmospheric Sciences Award from the American Institute of Aeronautics and Astronautics (AIAA) in 2002, the Exceptional Service Award from the Air Force in 2008, and the Air Force Distinguished Civilian Award in both 1997 and 1999. He is a fellow (academician) of the International Astronautical Federation and the International Council in System Engineering, and an honorary fellow of the AIAA. He is also a member of the National Academy of Engineering.

Yang is an internationally recognized leader in design theory and design process, with a focus on the role of design representations. Her research considers early-stage processes used to create successful designs, from consumer products to complex, large-scale engineering systems. Yang has made significant advances in characterizing the relationship between design process and outcome. This work has been recognized by an NSF CAREER award, and in 2013, she was named an ASME Fellow in recognition of her engineering achievements.

With a focus on teaching students how to uncover ways to improve design in the world around them, Yang created 2.00 Introduction to Design, and has taught a number of other undergraduate courses including 2.00B (Toy Product Design) and 2.009 (Product Engineering Processes), and graduate courses 2.739/15.783 (Product Design and Development), in collaboration with the MIT Sloan School of Management and the Rhode Island School of Design, and 2.729/EC.729 (D-Lab: Design for Scale).

In recognition of her contributions to engineering education, Yang was named a 2017 MacVicar Faculty Fellow, in addition to being the recipient of multiple teaching awards including a 2016 Bose Award, the 2014 Ruth and Joel Spira Award, and a 2012 Earll M. Murman Award. She is the recipient of a 2014 ASEE Fred Merryfield Design Award, a 2014 Capers and Marion McDonald Mentoring Award, a 2013 ASME Design Theory and Methodology Best Paper Award, and a 2008 Robert N. Noyce Career Development Professorship.

From her days as an undergraduate to her role as a faculty member, Yang has made an indelible mark on the school of engineering and the Institute. In the department of mechanical engineering, she was the Faculty Ambassador to undergraduates until becoming Undergraduate Officer in the fall 2018. She has served as mechanical engineering’s Area Head for Design and Manufacturing and was the co-organizer of the Rising Stars in Mechanical Engineering in 2018. She was a member of the extended committee for the New Engineering Educational Transformation (NEET) program, and a member of the Faculty Advisory Board for the Technical Leadership Program. She served as the Chancellor’s Designated Representative for the Committee on Undergraduate Programs and was a member of the Corporation Joint Advisory Committee on Institute-Wide Affairs. She also recently co-chaired a cross-Institute faculty committee on the future of design at MIT, and currently serves on the faculty steering committee for the MIT Climate and Sustainability Consortium.

Hastings and Yang succeed Michael Cima and Anette “Peko” Hosoi. “I am tremendously grateful to Peko and Michael for their incredible contributions to their roles and the school,” says Chandrakasan.

Hosoi, the Neil and Jane Pappalardo Professor of Mechanical Engineering, had a deep commitment to mentoring and support and creating a nurturing and inclusive community in her role as associate dean of engineering. She was instrumental in the school’s faculty promotions and hiring searches, as well as developing opportunities for faculty mentoring and resources. She spearheaded the effort to launch the School of Engineering’s Faculty Gender Equity Committee, and was likewise an integral part of bolstering graduate student support and opportunities through her involvement in multiple fellowship selection processes. She has returned to her research, teaching, and advising within the department of mechanical engineering.

Cima, who also served as co-director of the MIT Innovation Initiative, was actively involved in efforts to bolster innovation across the school and to cultivate the next generation of inventors, which he achieved through a variety of roles including serving as faculty director of the Lemelson-MIT Program (a role that he will continue) and sitting on the advisory boards of the Bernard M. Gordon-MIT Engineering Leadership Program, MIT-BU Law Clinics, and the MIT Hong Kong Innovation Node. Cima’s support of educational opportunities also extended into the fellowship selection processes for the school, and identifying students for support in advancing discovery and innovation across various disciplines. Come September, he will return to his research, teaching, and advising within the department of materials science and engineering.