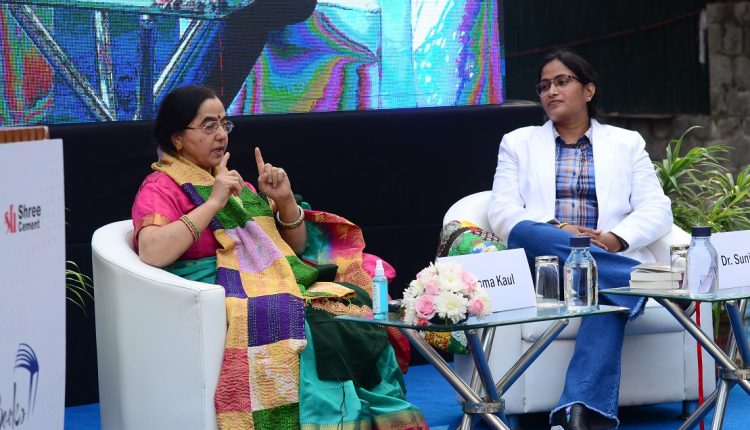 · `Don’t kill me for being a Hindu, give me a sword and I will kill ten militants with it” said Kshama Kaul, author of Dardpur at the launch of her book Murti Bhanjan, at Kitaab Festival

·
A thought provoking session was set in motion when Khalid Javed said “Insano Ko Chehre Nahi Maukhote Diye Gaye Hain’, nobody is superman, we all are vulnerable” he said in context to people who went through existential crises during corona times.

NEW DELHI: Prabha Khaitan Foundation instituted its third day of Kitaab Festival at India International Centre annexe and released four books with riveting and aggravated discussions. The releases of books were spread over four circumstantiated sessions involving discussions and gripping conversations available on the foundation’s Youtube channel for public view. All the sessions were initiated and felicitated by different eminent members of Ehsaas – Women followed by interviews and conversations with respective authors.

A power-packed day started with intense discussions and statements around religion and politics when Jyotish Joshi explained Tulsidas’s relevance in modern times. In conversation with Dr. Sunita, He asserted that one can not get a full view of a subject until you have the patience to read it in detail. Let’s not mock and reject Ram or Ramayan without making a sincere effort to look at him in a holistic manner. He attempts to explain the relevance of Tulsidas in today’s time and date, and how as a human he imparted profound values to us through his new book Tulsidas ka Swapna aur Lok. During the course of dialogue exchange Jyotish joshi said “‘Ram Naam Satya Hai’ Tulsidas ke Pehle nahi tha, Ram ki Satyata par jo Shraddha Hum Rakhte Hain Wo Tulsidas Ji Ki Wajah Se Hi Hai'” ( Tulsidas is the reason for the faith we have in the truth of Ram)

The day progressed with second discussion and held some highly debatable and heated talks about the Kashmiri genocide and mass exile with author Kshama Kaul. At the release of Kshama Kaul’s new book Murti Bhanjan , she said “Don’t kill me for being a Hindu, give me a sword and I will kill ten militants with it”. She elaborated her new novel is based on a real-life catastrophe of the war-like situation she had to undergo decades before. And her new novel talks about the tragedy of Kashmiri Hindus who were brutally murdered, calling it a genocide that triggered forced mass exile. She said it is the most atrocious and cold-blooded event in the history of India. Militants and stone-pelters were given jobs and we had to leave all our resources behind to start from scratch. She said that terrorism crumbled and destroyed us and mourned that nobody came to their rescue. Lamenting that Delhi did not treat us with respect when we came here penniless. She relieved her journey in her speech and revealed how Kashmiris were barred over many places in Delhi and nobody wanted to help. She was put in acute pain because she was a Hindu and the word ‘Hindu’ became an expletive to hurl abuses for the people in Kashmir then.

She reminisced about the time when she had no money, no resources. And the government did not help, she was teary-eyed while she dwelled upon the painful memories and situations she had to go through on stage. Kaul said she wrote this book so that nobody has to suffer again. (Kshama Kaul has also authored Dardpur before this.)

Aradhana Pradhan initiated and introduced many conversation sessions in the course and she said promoting books and inculcating the habit of reading is a good Initiative by Prabha Khaitan Foundation, they are promoting English, Hindi, and Urdu literature through Kitaab Festival, the way they are providing a platform to authors and publications speaks not only about foundation’s enthusiasm but adds value and boosts optimism through work prospects for many. “I feel elated to see their honest efforts,” said Aradhana Pradhan from Ehsaas Women of Delhi NCR.

A Bird From Afar, a novel by Anshul Chaturvedi marked the third curve in the course of the day. It was a dazzling affair as Suhel Seth, Amitabh Kant, (Ceo Niti Aayog), Neela Madhab Panda were there to congratulate Anshul for his phenomenal work. Neela Madhab expressed ” it is the most incredible fictional book I have ever read”. Anshul read a few excerpts from his book for the audience. It discussed Death of Subhash Chandra Bose overshadowed his life and people didn’t know much about the philosophy he wore and what beliefs he nurtured. This book unveils facets of his life and not death. Anshul mentioned that this novel is not a political book he had no pre-fixed mindset when he explored, he had no target audience to placate. He said “I have a thought process and it’s a story.” He has positioned the narrative of the story to point out that we don’t look at military thoughts with as much nuance as we should, he made clear.

Amitabh Kant congratulated Anshul for his new book and said those who fought for India must read the book. Neela Madhab Panda said it’s an incredible fictional history book. Anshul read few excerpts from his book for the audience

The last session was magnificently opened by Shazia Ilmi in her elegant and classy Urdu style at the book launch of Maut Ki Kitaab by Khalid Jawed. In an intriguing discussion, Azhar Iqbaal asked Javed if he considers himself the outsider of Urdu fiction to which he replied he said I follow the language of my soul and believe in the original expression. One should not follow fashion or copy others. Jawed also revealed a snippet of his book, the protagonist in his novel anticipates and prepares for committing suicide but doesn’t kill himself. “Idea to commit suicide is better than suicide”, Jawed connoted. Khalid Javed is an Indian novelist and leading Urdu fiction writer. He has penned novels Nemat Khana and Ek Khanjar Pani Mein previously.

Concurrently Dr. Nidhi Garg was asked for her remarks about the interesting book launches and Kitaab Festival. Garg from Ehsaas Woman of Bhubaneshwar said Kitaab Festival is a platform to promote reading books in the era of Instagram reels and Facebook Stories. It is an encouraging step for all the authors who are penning their thoughts and perspectives. providing a chance to the readers to interact with authors and know more about the scenes behind the book. The festival has aimed to bring books from various zones under one roof giving the audience different flavors on the plate.