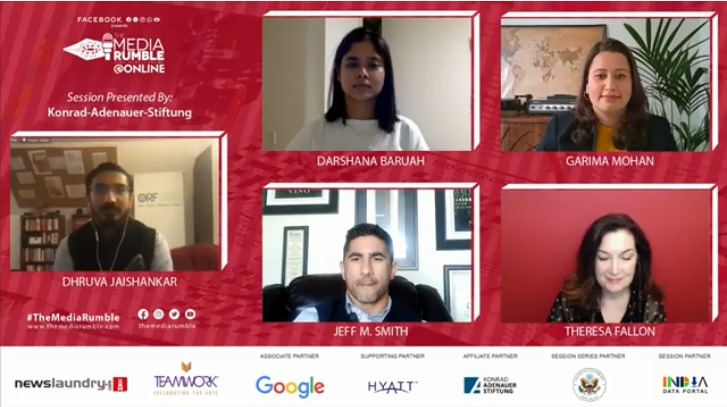 New Delhi: The third day at TMR@Online, the digital edition of the annual news media forum, The Media Rumble (TMR), featured two sessions deep-diving into the world of entertainment media, dissecting the nuances of the silver screen and how we view our world through the stories we tell. Two critical sessions, presented by Konrad Adenauer-Stiftung, a German political foundation, focused on the EU’s engagement with Asia and specifically with India, speaking about the need for shifting perspectives in view of the new global economy and geopolitics.

The first session featured a discussion on the portrayal of cops, courts, and lawmakers in popular culture. In the session titled – Representation of Law and Order in Cinema, moderated by Anushka Shah, Founder Civic Studios, the panellists included Hussain Zaidi, a leading crime writer whose many best-selling books have been converted to Films, and Rema Rajeshwari- an IPS officer with a distinguished career of integrity, courage, and passion, spanning over a decade. Anushka Shah started the session with a presentation on how on-screen depictions impact the audience’s perception of law and order in real life. “Often public institutions and characters like the police, lawyers and judiciary are portrayed as inefficient and the public trust in them is low.” She commented.

Rema Rajeshwari said “Many blockbuster movies have normalised police brutality on screen. Very often the role of the police is limited to delivering swift justice without regard for the law itself. The reality is very different. Police work is almost always long hours and has more to do with upholding and enforcing the law impartially, protecting human rights life and dignity of the people, preventing crime and ensuring public order. I am afraid that any filmmaker will take the risk of showing what we actually do.” Rajeshwari spoke about the dedication and hard work which police personnel put in day-to-day and highlighted their role as frontline warriors during the pandemic. She said that while the negative stories easily go viral, the truth about the good being done rarely get far.

Speaking from his perspective and experience as a crime-writer, Hussain Zaidi commented, “The depiction in the media is definitely exaggerated, but some of the perceptions about the police personnel are also based on reality.” The panel discussed that this was also a cyclical effect stemming from a lack of positive stories available in public consciousness and spoke about the need to create more awareness around citizen-oriented policing, educating the public about the role of the police and creating a more sensitised police force. Commenting on the adaptation of his novels in cinema, Zaidi added “What you see on screen is often very different from what is written in the book. Directors tend to take creative liberties to enhance the viewing pleasure by showing what the audience wants to see.”

The day veered widely with themes ranging between geo-politics, strategic affairs and cinema. The next session, Rethinking the European Project, began with Pankaj Madan, Deputy Head, Indian Office, Konrad-Adenauer-Stiftung speaking about the history and purpose of the European Union and highlighted its potential in the current geopolitical strategic landscape.

Moderated by Dr. Samir Saran, President of Observer Research Foundation, the panellists at the session consisted of Singapore-based author and journalist James Crabtree; policy fellow and head of the Paris office of the European Council on Foreign Relations Tara Varma, Deputy Head of Mission at the Embassy of Estonia in New Delhi Juuli Hiio, and Ambassador Dr. Mohan Kumar, Chairman of Research and Information System for Developing Countries (RIS). Dr. Samir Saran spoke about the difficult relationship Europe has with China, which hangs in fine balance between trade, economy and political stance, and their implications on Asia. James Crabtree highlighted the appreciable toughening of the European Union in the last couple of years against China as a strategic rival. He however emphasised that this toughness was mostly defensive; and the opportunity for Europe to have a proper Indo-Pacific geopolitical strategy in which the European Union begins to spend serious money, with a position in Asia, going as far as even having a military presence in the region, was yet unexplored. He said, “If China can be spending billions of dollars on a Belt and Road Initiative in Europe’s backyard, there is absolutely no reason why rich countries of Europe can’t be beginning to be the part of a coalition of a financial alternative along with India, Australia, Japan and the United States.”

Samir also pointed out the seeming ambiguity and exceptionalism in France’s stance towards China to which Tara responded highlighting Emmanuel Macron’s clear position since he came to power in 2017 that he wanted to “Europeanise” the answer to China’s offensiveness and create a more autonomous strategy for EU; this has led to some understandable frustration within the Union and its partners. She also highlighted France’s strong stance and its role in recent European strategic autonomy building up post Covid, admitting though it was more a response to China, given their disinformation campaigns, information manipulation and sending outdated equipment including masks and testing kits. Speaking about China’s salami-slicing tactics in Europe, Juuli said that given recent global developments, Estonia was slowly seeing added value in the 27 + China dialogue reiterating EU’s increasing solidarity and also its relationship with India. She further spoke briefly about plans for the implementation of 5G technology and about Estonia’s significant strengths and its role in the highly-charged geo-technology ecosystem.

In his assessment of the situation from India’s policy-planning perspective, Dr. Mohan Kumar spoke of two important strategic challenges. One was the Sino-Russia relationship which may or may not be heading towards an alliance, and the fundamental unwillingness of the European Union to adopt a bold position in the international landscape. He also highlighted India’s lack of decisiveness in closing the FTA negotiations with the EU and expressed the need for both parties to forge long-pending strategic alliances.

The following session Balancing Powers or Norm Shapers? Defining India and EU’s proposition for Asia was moderated by Dhruva Jaishankar, Director of the U.S. Initiative at the New Delhi-based Observer Research Foundation (ORF), with panellists consisting of Jeff M. Smith, a research fellow in Heritage’s Asian Studies Center, focusing on South Asia; Darshana M. Baruah; a non-resident scholar with the South Asia Program at the Carnegie Endowment for International Peace; Theresa Fallon; founder and director of the Centre for Russia Europe Asia Studies (CREAS) in Brussels; and Dr. Garima Mohan; a fellow in the Asia programme at the German Marshall Fund of the United States.

Speaking on the recent friction between China with many countries around its periphery including India, and also with the USA, Jeff said that it has brought the two countries closer together, and also underscored the need and meaning behind the free and open Indo-Pacific strategy. Agreeing with Jeff, Darshana Baruah said that until a year ago it was not clear where India, Australia, Indonesia, even Europe stood; whether they were going to take a stand for or against China.

Theresa pointed at a huge change in sentiments in Europe towards China, which was already beginning before the pandemic. She commented, “The more Europe was exposed to China the less they liked it.” Referring to the Indo-Pacific guidelines of Germany, which Theresa called monumental, Garima added that it shows an increasing feeling in Europe that they need to work with countries in the Indo-Pacific region who can be useful partners when it comes to dealing with a lot of China-related problems.

The last session of the day circled back to the silver screen where, in Slice of Life Cinema: Reflecting India’s realities, Executive Editor of Newslaundry, Atul Chaurasia, was in a riveting conversation with award-winning actor Gajraj Rao and gifted actress Richa Chadha. Storylines portrayed on screen are increasingly reflecting India’s realities, within the setting of semi-urban and tier-2 cities and characters. Atul Chaurasia started the conversation by asking if this was going to be the new mainstream, and whether fantasy and stardom were being side-lined?

In response to this Gajraj Rao said, “This is a cycle; in the 50s and 60s, films made by Bimal Roy, Guru Dutt, Hrishikesh-Da etc., the writers had importance, stories were taken from literature because of which they were closer to reality. Later in the 70s and 80s, Hindi cinema moved away from literature and into entertainment, as film-writers started writing for the Box Office. Now filmmakers are returning to the stories, to literature, and OTT platforms have played a role in this as the audience now is exposed to a more global content.”

Rao highlighted that in the past decade, new directors like Anurag Kashyap, Vikramaditya Motwane, Abhishek Chaubey and many others had started taking risks which had paid off in films like Badhai Ho and Subh Mangal Zyada Savdhan tackling controversial subjects and receiving popular acclaim. Chadha added that given audience reception, mainstream stars are also now focusing on real-life stories. “Fantasy films for the common man will always be there as escapist entertainment. I don’t judge that kind of cinema; it will co-exist”, she said, adding that popular movies like Avengers are also still made in Hollywood as well, but they are not critically-acclaimed nor will they be seen at the Oscars or the Emmys.

Talking about the reasons behind the rise of OTT platforms that has spurred this shift in audience demands, Chadha said, “In 2020, many things will be dismantled due to the pandemic. The footfalls in cinema halls had already been shrinking every year because of costly film tickets, prices of food and beverages etc. If cinema has to survive, it has to look at the South India model where there is a cap on ticket pricing.” Richa further added that the internet generation has disconnected from TV. “Now OTT has bridged the gap. There is no dearth of choice, there is no censorship and that’s why people are addicted to OTT.”

While they have recently come under fire for not falling under the preview of censorship, Rao was vocal in his support for OTT platforms, “I would call OTT democratic; if you have voting rights, you have the right to choose content.” he concluded.

The final day at TMR@Online will feature a slew of discussions on digital news media including the Digital News Report 2020, the role of Data in Journalism, upskilling media professionals as well as policy frameworks for the digital world. There are also sessions discussing the media coverage of the Covid-19 pandemic, the rise of misinformation, its impact in times of the pandemic and the urgent need for fact-checking. The updated schedule is available at https://themediarumble.com/schedule and the sessions are accessible through free online registration at https://themediarumble.com/registration.