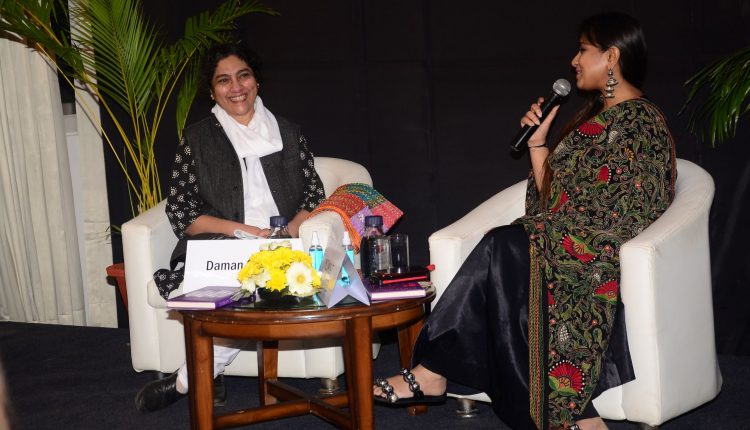 The insightful session was introduced by Archana Dalmia. Author Daman Singh was felicitated by Preeti Gill. Gill is a publishing professional and Ehsaas woman of Amritsar, who expressed herself amid the session saying “today’s session is interesting and I want to know more about data that tells how trauma had impacted people who came from partition and communal conflict.

During the course of a riveting conversation with Priyanshi Patel, Daman Singh was asked what intrigued her to write a book on mental healthcare. To which she answered It started just as an interest in psychology and then over the period of time it grew stronger and became an idea to write. It was difficult to write this book. And It took her 4 years to complete it.

She was further asked, “The way she has arranged the book, what did she want the reader to take away from it ? She answered, there is a lot of taboo around the term “mental illness” and we don’t talk about it as openly and as often as we should. Her book is not about mental illness or how to deal with it but it is the story of how mental health care in India evolved over the last 125 years. It is a story that starts with a mental hospital in the country and it brings us up to date. In today’s India mental hospitals are a very tiny part of the healthcare landscape.

The session buzzed around history and the current status of the mental health system in India. Her book includes data and studies dating back to 18 century. Revealing more about her book she said that In the 18 century, Asylums were set up for the insane, as the word was commonly in use, across British India. These asylums were dark, dreary, and oppressive places. These were places meant to confine and control the insane.in some parts of the world in 19 century, an alternative way of thinking had emerged. It was felt that insanity is not something supernatural influenced by the planets or by evil forces or occult. It is like any physical ailment. It is something that happens within the body and just like we treat physical ailment we should also treat mental ailments. That sort of thinking led to changes in different parts of the world and asylums began to be reimagined or redeveloped as mental hospitals.”

Singh’s dialogues invoked endless discussions and confabulation with the intent to understand the mental health care system with a comprehensive perspective.

While talking in a discussion at the book launch Neelima Dalmia Adhar, said, “Daman Singh’s book ASYLUM is detailed and meticulous documentation on the asylums in India. Declining mental health is the real pandemic. Millions are trapped within their minds. The narrative is slowly changing because we need to wake up to know that it’s okay not to be okay.” She further added that Asylum is a must-read to get a feel of this rare sensitive study on this subject.

MoS, Electronics & IT and Skill Development and Entrepreneurship, Govt. of India to inaugurate MedTech – A Center of Entrepreneurship (CoE) at Lucknow on 18th December 2021*