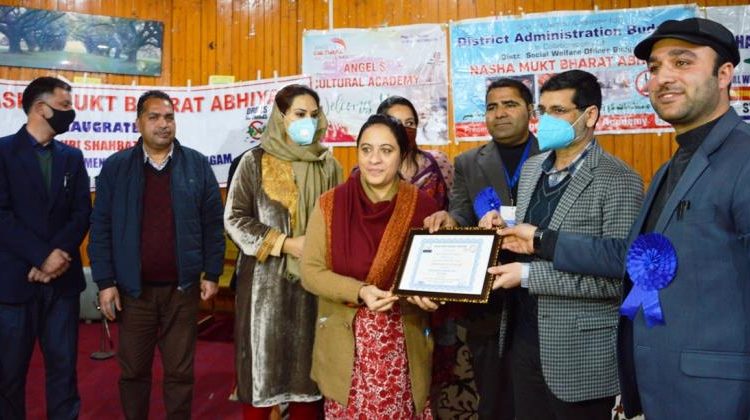 The event was jointly organized by the Social Welfare Department and District Administration in collaboration with the Department of Health and many NGOs including Angels Cultural Forum.

Speaking on the occasion, the DDC said that relentless efforts and commitment is required to take the Nasha Mukt Bharat Abhiyan as a result oriented campaign. He said rigorous mass awareness at all levels to spread the message among common people is need for the hour, as this is a complicated problem which requires serious steps at the right time to curb it.

He said drug addiction has the capacity of devastating the future of our young generation. He said we jointly have to share responsibility in keeping vigil at our wards and their close ones to prevent them from getting into this menace. DDC said we have witnessed how many families have become victims of this menace.

The DDC appreciated the efforts of all concerned particularly the Social Welfare Department Budgam for their relentless campaign, since the Abhiyan was launched on 15th of August, 2020. He said District Administration is ready to envisage all required support and cooperation in taking this Abhiyaan as a result oriented campaign.

Earlier DSWO Budgam, Farhana Asgar presented a detailed curtain raiser of the events organized by the department with the support of other concerned at all 24 identified hot spots across the district. She said during the campaign they observed an overwhelming response from the general public, particularly youth.

Witnessing great response from the general public, she appealed the DDC that they are allowed to continue the activities related to Abhiyan even after its culmination on 31st March 2021.

During the daylong Abhiyan, various programmes including cultural, mini skits, debates, nataks were presented by Angels Cultural Forum depicting and demonstrating precautions, its hazardous effects on our generations, besides measures how to get rid of this menace.

Later, DDC presented certificates, mementos to various persons, District Officers, Media persons, NGOs, Volunteers who with their sincere support and commitment enabled them to make the campaign a success.

iednewsdesk Jan 28, 2022
An analysis of large salt deposits on Mars indicates that ponds of liquid water existed on the Red Planet for…