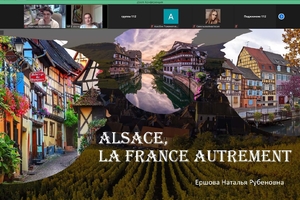 Days of Francophonie held at PetrSU

Days of Francophonie were held at the Institute of Foreign Languages. And this is already a long-standing tradition.
It is not the first time that Konstantin Viktorovich Sergeychev, a French language teacher at St. Petersburg State University, comes to Petrozavodsk to participate in the Days of Francophonie. He has got his fans who are looking forward to the continuation of two of his lectures: “Kings, Queens, Favorites”, dedicated to the history of France, and “New items in the French stage.”

For the first time as lecturers this year were Ph.D., Associate Professor, Acting Head of the Department of French and Linguodidactics of the Institute of Foreign Languages ​​of the State Autonomous Educational Institution of Higher Education of Moscow “Moscow City Pedagogical University” Mikhailova Svetlana Vladislavovna and Associate Professor of the Department of German and French Philology of the Higher School of Social Sciences and Humanities and International Communication, Ph.D., Associate Professor of the Northern (Arctic) Federal University named after M.V. Lomonosov Ershova Natalia Rubenovna. In addition to the most interesting stories about a seemingly so familiar, but still in some places surprising and unknown France, the participants of the meetings tried their hand at creating a common written text, got acquainted with the concept of seterature ( composite from network literature; direction in literature and literary criticism , in the framework of which texts are produced and sold in a hildren ( the Internet )), as well as learned some necessary components of communicative behavior of the French.

Among the participants were not only students of the Institute of Foreign Languages, who are already accustomed to such events, but also the Institute of History, Political and Social Sciences, the direction of training “International Relations”, 2 course, studying French under the guidance of T.M. Tatarina, Ph.D., Associate Professor of the Department of Foreign Languages ​​of Humanities, who shared their impressions.