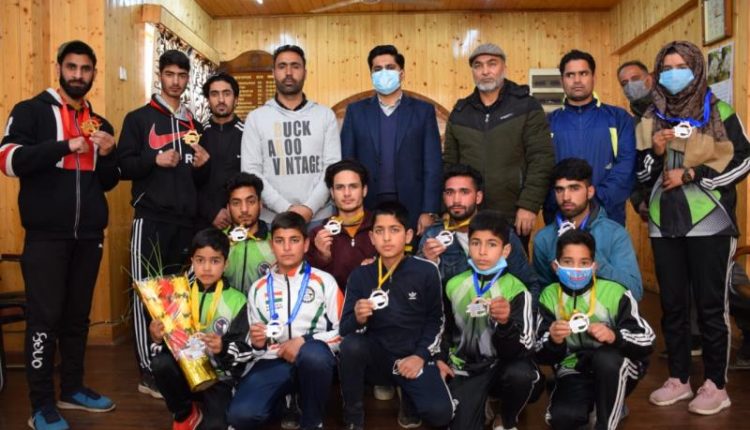 Two players among them Muzaffar Ahmad Kawa from Kulhama Nadihal and Feroz Ahmad from Bagh Bandipora won the belts for the first time for the Union Territory while one participant Uzair Ahmad 8 years old was the youngest player among the participants of the UT.

The championship was organised by Thaiboxing Federation at Hyderabad, Telangana from 26 to 28 February, 2021.

While interacting with the players, the DC congratulated them for their participation in the championship and said that it will go a long way in motivating other youngsters to take interest in sports. He assured every possible support to youngsters for increasing sports activities in the district.

He urged them to spend their leisure time in sports activities so that they do not get indulged in any anti social activities like drug abuse.

He said the district administration is keen to develop sports infrastructure in the district and under different schemes, not only the play fields are being developed in every village but sports items are also distributed among the sports clubs of different villages besides numerous tournaments are organised under Khelo India.

He said the sports calendar for the upcoming summers has already been devised and soon the outdoor sports activities will start in the district.

Awareness programme on registration on e-Shram portal organised at Shopian

RWTH: “Graphene 2022” shows the potential of a future…

Awareness programme on registration on e-Shram portal organised at…