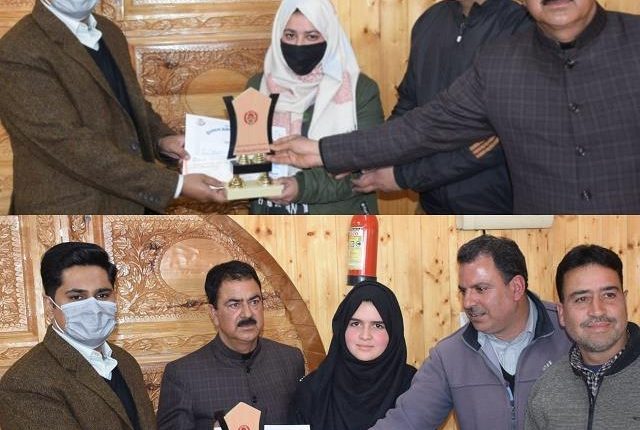 The two female students namely Aveena Nisa and Mehruk Ayub scored 498 marks each out of 500 in the exams, the result of which was declared recently by the JK Board of School Education.

On the occasion, the DC presented mementos and appreciation certificates to both the girls and also presented cash reward to them.

The students were accompanied by their teachers and parents. While interacting with the students, the DC appreciated them for passing the exams with flying colors and said that their success is an inspiration for other students especially girls who despite all odds performed well in exams. He asked them to work hard for the future examinations.

The students talked about their areas of interests, strengths, difficulties besides their approach to qualify the exam. The DC hoped that they would inspire many other youth from the region to crack other prestigious exams as well in order to serve the society in the best possible way so that their energy would be utilized for the development of the nation.

The DC advised the students to stay focused in their resolve towards excellence and continue to be an inspiration for others. He said the young toppers have brought laurels not only to the district but their respective schools as well.