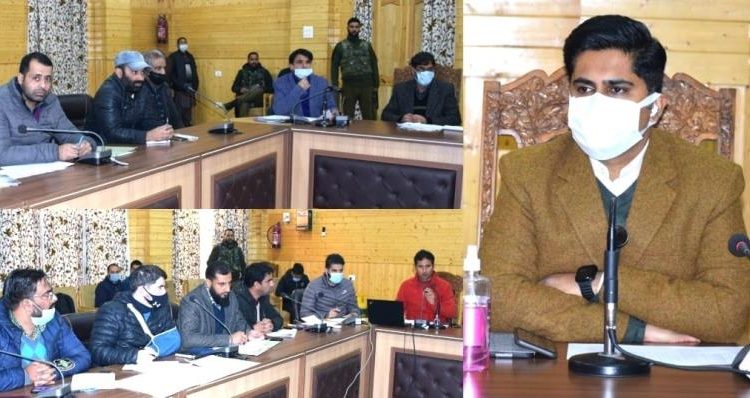 BANDIPORA : The Deputy Commissioner (DC) Bandipora , Dr Owais Ahmad on Saturday chaired a meeting of officers to review the progress of works being executed by the Rural Development Department proposed under District Capex Budget (DCB) 2021-22.

Meeting reviewed the estimation, tendering and allotment status of all works including DDC/ BDC/PRI grants. The meeting also discussed detailed proposals under the District Capex Plan, 2021-22 including physical status of projects targeted for completion in the current fiscal and took a comprehensive review on the progress of developmental projects undertaken by various departments.

While reviewing the progress on framing of estimations, the officials informed that all major DDC works, BDC works and PRI works have been tendered so far while work is in progress to tender out other works. It was given out that out of 669 works, an abstract of 578 works have been received.

The DC sought details from the heads of departments including Rural Development department, Health, JKPDCL, R&B, Jal Shakti and other sectors about the approved works, tendering status, status of estimations and progress of ongoing projects/works.

Speaking on the occasion, the DC said that district administration is committed to ensure all development projects/works are completed within a set timeline. He stressed on the concerned officers/officials to take all possible measures to accelerate the pace of the ongoing works for their time-bound completion and directed for regular monitoring of works.

Dr Owais directed concerned officers to complete the paperwork of pending works at earliest and also asked them to expedite under execution works to meet the target.