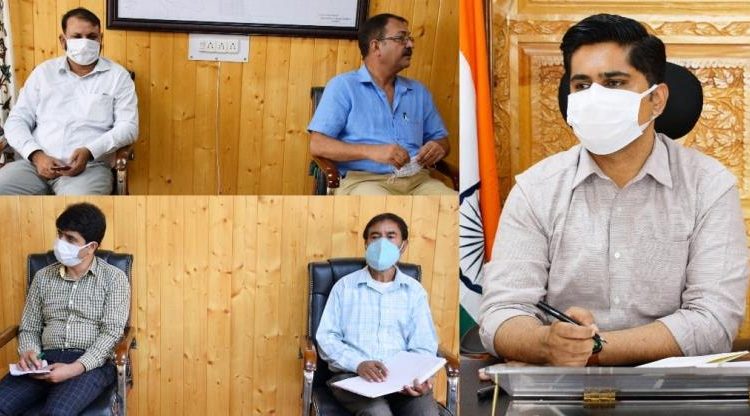 BANDIPORA : The Deputy Commissioner (DC) Bandipora, Dr Owais Ahmad on Monday chaired a meeting of officers to discuss the developmental scenario and the activities being carried out by Wullar/Mansbal Development Authority and Wullar Conservation and Management Authority.

The meeting discussed the status of DPRs for construction of Boulevard Road around Wullar Lake.

He also reviewed the status of works being executed in the Wullar with physical and financial achievements, operationalization of Huts in the Wullar Vintage Park, Construction of TRC at Bandipora and providing of Solar Lights to the left-out households of Banayari village by WUMCA.

It was decided that a joint spot visit of Revenue, WUCMA and R&B shall be held to formulate a plan while taking all stakeholders onboard.

Dr Owais also directed the officers of the tourism department to come up with a proposal immediately to revive the water sports in Wullar. He said the introduction of water sports in Wullar will help the local youth to earn their livelihood and will open the doors for further job opportunities to the local unemployed youngsters.

He said the Wullar lake is the valuable asset of not only the district but for the whole UT. He said if the tourism potential is exploited fully, it will entirely change the socio-economic condition of the local population by improving the living standard of the people.

Dr Owais said that there is a huge potential for Water Sports besides having a huge fish stocks in the lake. He said the administration also intends to develop a Golf Club on one of the islands inside the Wullar. He said the restoration of the lost glory of the lake is in full swing.

The DC emphasized on development of tourism spots in the district especially around the Wullar lake and asked the concerned officers to do the required repair and renovation of the tourist places/ parks so as to make them operational soon besides outsourcing the vintage huts operational at Wullar Vintage Park at Garoora.

He advised for timely completion of tendered works and directed WUCMA to monitor quality and quantity of works and take special note of the disposal of the dredged slurry in the identified sites only. He further directed to set and monitor daily targets to complete the work within allotted time frame.

On the occasion officers briefed the DC about the progress made in the dredging operations carried out in different sections of the lake during the current year. It was informed that the dredging work in critically silted portions of the lake is the major component under which an area of more than 3 square kilometers of silted area has been taken up under Wular Action Plan.

Officers also briefed the chair about the nature of catchment conservation works; biodiversity Conservation works and eco-tourism development works that have been taken up under the Wular Action Plan.

The works under Wullar conservation project has been taken up on a large scale after UT administration has sanctioned Wullar Action Plan for Rs 200.00 crores for conservation and management of Wullar Lake.