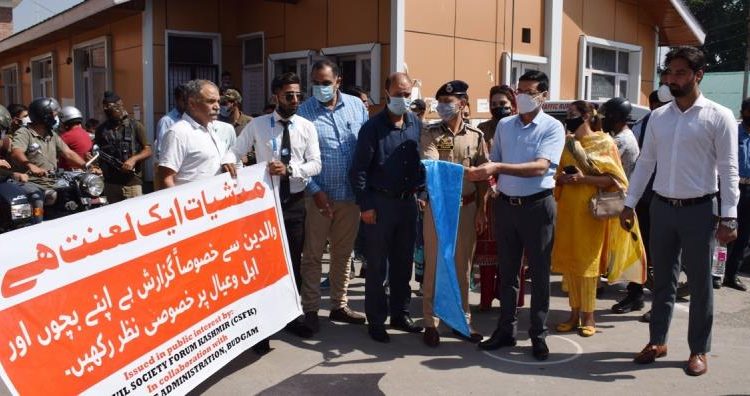 BUDGAM : The Deputy Commissioner (DC) Budgam, Shahbaz Ahmed Mirza today flagged off a Bike Rally from District Headquarter here to spread awareness among the public regarding the menace of Drug addiction and urgent need to stop drug abuse.

Enroute to various destinations, the Bikers distributed posters and pamphlets among shopkeepers and medical shops depicting the strong message about ill consequences of drug abuse and the critical role of parents to take care of their wards and ensure non-involvement of their children in Drug addiction.

Meanwhile, the DC stressed that Drug addiction as a menace is witnessed across valley and in this context, District Administration Budgam, this year in collaboration with NGOs under ‘Nasha Mukt Bharat Abhiyan’ has initiated campaign aimed at raising awareness among public and need to eradicate this menace from society.

A series of programs focusing upon eradication of Drug abuse are in pipeline and shall be taken up in the current year to tackle the drug abuse acting as silent killer of society, the DC said.

The DC emphasized that educational institutions across the district have a vital role to play in imparting awareness to the students regarding menace of Drug addiction and in this regard, teachers are instructed to guide children about drug abuse, its ill consequences while involving them in Co-curricular activities.

He further said that strict and effective enforcement measures against drug addiction in the District are put in place under the supervision of SSP Budgam.

As part of social and collective responsibility, the DC urged upon the public and all other stakeholders to come forward particularly parents to inculcate moral values and ethics among their children besides media both Government and private in larger public interest to disseminate information and awareness related to Drug addiction and its abuse in the district.