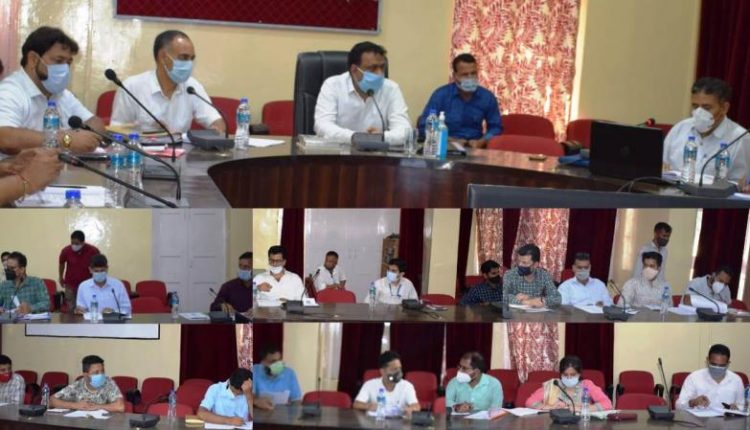 At the outset, threadbare discussion was held on achievements in priority and Non priority sectors vis a vis Annual Credit Plan (ACP) and other individual beneficiary Schemes.

The concerned Departments and bankers shared their views on account of non achievement of the desired targets in respect of some priority sector segments which includes Agriculture, MSME, Education, Housing etc.

The DC asked heads of the banks to take required steps to increase the CD ratio in the district at par with the National target. He asked the sponsoring agencies to support maximum cases for increasing the MSME credit, Education loan in the district. He further asked the sponsoring agencies to ensure that the beneficiaries who avail the benefits of the self employment schemes are actually making purposeful use of the same.

Moreover the DC asked the Lead Bank Manager SBI to furnish figures of the self-employment units sponsored under individual benefit schemes by various departments and banks that are actually running and have done extremely well. He said it will help to know the real outcome of these schemes.

The DC also directed the line departments to project the current progress in comparison to the last year achievements and the other districts as it will help in initiating corrective measures.

With regard to opening of a new bank branch at Dali Udhyanpur, the DC directed the concerned quarters to submit the latest development in writing to his office.

The DC also directed to expedite the progress of ADHAAR seeding on war footing basis in coordination with the other departments and clearance of the pendency especially under KCC and other individual benefit oriented schemes.

The meeting also discussed the issue of merger of EDB Jatheli with EDB Doda and the DC asked the concerned bank representative to submit a detailed report so that appropriate measures are taken to avoid inconvenience to the people.

Further the DC directed the heads of Banks to ensure that Covid-19 SOPs are properly followed in their respective bank branches and ATMs. , He warned of strict action against showing any laxity in this regard.