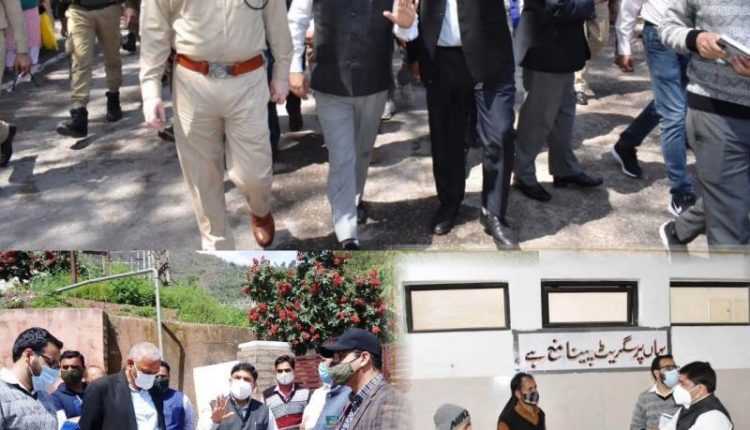 Poonch: To take first-hand appraisal of the progress achieved in face-lifting of the city and the issues being faced by the residents of the main city, the Deputy Commissioner Inder Jeet today conducted a whirlwind tour of the Poonch township.
The District Development Commissioner was accompanied by SSP Dr. Vinod Kumar; Assistant Commissioner Revenue, Mr. Zaheer Ahmed Kaifi; Chairman MC, Sunil Sharma; Executive Engineers of PWD, PDD, PHE, and other officials of different departments.
While reviewing the work of the beautification of Police Station Chowk and the adjoining road, the XEN PWD was directed to place dividers on the road along with the construction of footpaths. The sewage issues of the area were also discussed and necessary directions were give to the concerned officials to clear the choked drains and put better system in place for effective sewage disposal of the area.
While visiting Poonch Fort, CEO MC Poonch was directed to create awareness among the public to avoid littering along the roadside and keep the markets of the city clean and green. He was further directed to get the bushes removed from around the Poonch fort.
Later, the Deputy Commissioner also visited the District Court complex where he interacted with the members of the Bar Association and other officers of the prosecuting wing.
The President Bar Association, Maroof Khan projected several demands like shifting of a transformer from inside the court premises, making availability of accommodation for judges and meeting halls for advocates etc.
Responding to issues, Deputy Commissioner assured that all their genuine demands shall be fulfilled on priority. The ongoing work of the Court Complex was also inspected and XEN PWD was directed to make sure that the work is completed within the stipulated time frame.
Earlier, the DC visited the main market of Poonch and urged the shopkeepers to keep their shops clean and follow all the necessary SOPs laid down to control COVID-19. Apart from this, various Bank branches were also inspected by the Deputy Commissioner.
During his visit to District Hospital, the DDC instructed the concerned to ease traffic congestion by taking necessary steps to create an alternate road towards the hospital. Widening of the existing road and timely completion of the circular road were also stressed upon by the DC. He also visited the OPD and Emergency wing of the Hospital and instructed the doctors to work with dedication and punctuality.
During the visit DC also visited Shahid Manjit Singh Park, Parade Park, Poonch Fort and Tehsil office Haveli.
The general public of the area praised this gesture of the Deputy Commissioner and hoped that their long pending demands shall be met in the time to come.