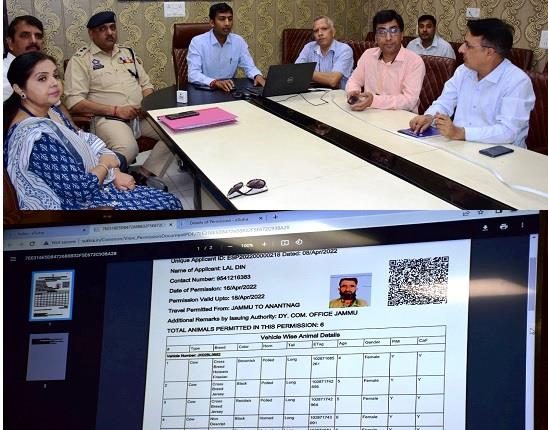 The Deputy Commissioner said that the portal would help in providing transport permits for animal welfare. He added that it has inbuilt tracking facilities and would ensure time-bound disposal. The system has been designed on instructions of Lieutenant Governor Manoj Sinha to ensure smooth movement of tribal families to upper reaches of J&K during April-May months.

DC said that 195 permits already stand issued till date as against mere 15 by the same time last year.

Animal Husbandry, Police and Transport departments share the online to provide single window clearances and permits to applicants. It curtails human interface thus saving time and eliminates scope of harassment for the applicants.

Notably, the portal is equally responsive to the need of “Dera” as well as “Non Dera” movement of animals. “Only fit vehicles will be allowed to transport animals ensuring safety of animals and insurance for the owner in case of any unforeseen incident. This portal eliminates possibility of any duplicity, with data available on click of button. The portal is also linked with the ‘Vahan’ software of the Regional Transport Office, Jammu to access the fitness and insurance of the transportation vehicle.

E-suttra (sutra.in) will be a boon for the tribal community as well as non tribals.