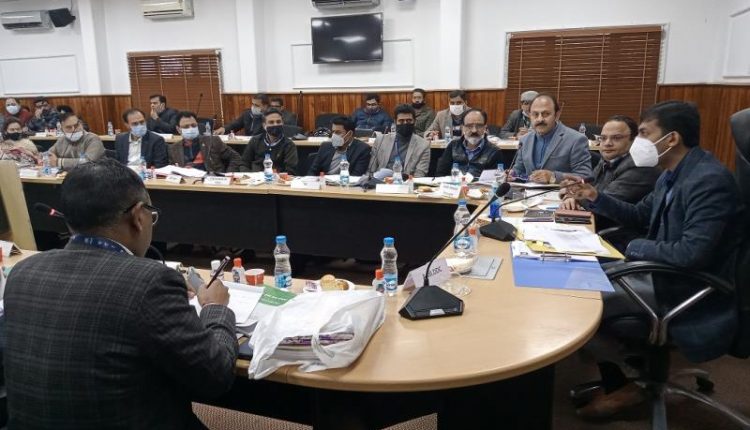 He also reviewed the progress under various Govt. Sponsored and Social Security Schemes.

Deputy Commissioner expressed concern over low CD Ratio of in the District with 31.52% despite highest advance portfolio of Rs 16,240.50 crore.

On the Atma Nirbhar Bharat Abhiyan front, Banks have sanctioned 3756 cases under PM-SVANidhi scheme out of which 3452 cases stand disbursed, which was appreciated by the Deputy Commissioner.

The Deputy Commissioner asked all Sponsoring Agencies and Banks to spread awareness among people about various Self-employment Schemes launched by the Government and motivate them to avail the benefits of the same for generating self-employment opportunities in the District.

He also asked all the line departments to increase their sponsorship of loan cases and at the same time directed all the Banks to clear the pending cases sponsored by different Govt. Departments/Agencies at the earliest and give a boost to lending, particularly under Agriculture & Allied activities, MSME, Housing and Education Sectors, to achieve a healthy CD ratio.

The Deputy Commissioner also launched the PLP of the District for FY 2022-23 prepared by NABARD.

Later, the Deputy Commissioner also reviewed the progress regarding removal of encroachment and prevention of illegal mining from the bed of river Tawi.

The Deputy Commissioner directed the concerned officers to remove the encroachments alongside Tawi River and illegal mining.

He asked the concerned officers to take strict action against the violators and book them under proper sections of Law.