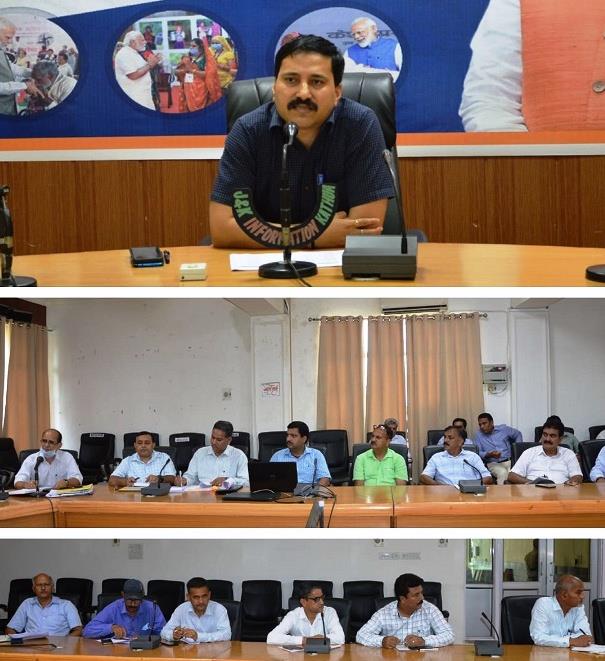 KATHUA : Deputy Commissioner Kathua Rahul Pandey today chaired a meeting of Government Higher Secondary School Principals held in the conference hall of DC Office complex. Chief Planning Officer, Uttam Singh, Chief Education Officer P.L Thapa and other concerned officers were also present in the meeting. At the outset, the Chief Education Officer briefed the Deputy Commissioner about the education profile, achievements of the district and apprised him about the issues being faced by different schools.

The CEO further apprised the DC about the outstanding performance of the district Kathua in recently declared results of Class XII. The DC congratulated the School Education Department and stressed on increasing the number of success stories. The DC called for adopting competitive spirit and replication of best practices to achieve excellence in the education sector. He laid emphasis on strengthening of Education indicators which ultimately will help in improving the overall Education scenario of the district.

The DC also called upon the CEO to work out a mechanism for rationalisation of teaching staff so as to ensure the right and just Pupil-Teacher ratio. The CEO was asked to compile a database, depicting the availability and shortage of staff in each education zone so that the problem of shortage of teachers can be looked into and addressed through rationalisation. The DC further laid thrust on taking equal care of Health and Education of students. “The Nodal Department has to play a crucial role in achieving the all round physical and mental growth of the students at all levels,” he maintained. He called for disseminating the message of Rashtriya Bal Swasthya Karyakram (RBSK) Camps being organised in schools to conduct health checkups and diagnosis of students.

The DC also impressed upon the prima facie identification and recommendation of children requiring special intervention to ensure timely diagnosis of the problems and proper treatment. The DC directed the CEO to keep a track of students’ enrollment and ensure all students availing pre-matric scholarship continue to avail the benefits upto post matric. He further asked for measures to bring down the dropout rate to zero. The CEO was directed to conduct the exercise for the documentation of the pre and post matric scholarships. The meeting also discussed at length the issues regarding the construction works, issue of unsafe buildings, identification of schools without boundary wall etc. The DC asked all concerned to physically inspect the sites and ongoing construction works so that creation of quality assets can be ensured.

The DC further enjoined upon the Principals to liaison with the concerned executing agencies so as to ensure that work is executed as per the actual plan. He also called for carrying out an exercise to ensure AMF in the schools besides flagging the issues that need intervention.