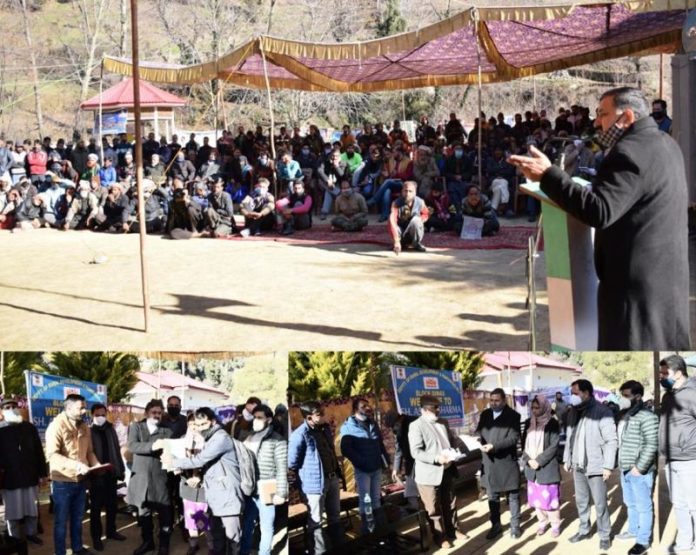 Kishtwar: To redress the grievances of the people at their doorsteps, Deputy Commissioner, Kishtwar Ashok Sharma, today presided over the weekly block Diwas programme, here at TRC Mughal Maidan.

Various delegations led by the sarpanches and panchs apprised the DC about their demands and grievances which include road connectivity to unconnected areas, augmentation of power supply lines with electric poles and insulators, recruitment of locals in various power projects of Kishtwar, coverage of left out beneficiaries under Sehat Scheme, shortage of staff in banks and educational institutions, provision of water supply to various habitations, among others.

After giving patient hearing to their grievances, the DC asked the PRI members to monitor the progress of works in power sector which will soon be resumed by Shalaka Company.

Tehsildar Mughal Maidan , was asked to furnish list of left out beneficiaries of Sehat Health Insurance scheme in consultation with PRIs.

He further announced that the water crisis will end as soon entire district is covered under Jal Jivan Mission.

He also redressed various individual issues during one to one interaction with locals.

En-route, he also reviewed the functioning of tehsil office Mughal Maidan and also interacted with the delegation of locals there.

Plantation drive was also launched by the DC in the premises of TRC.