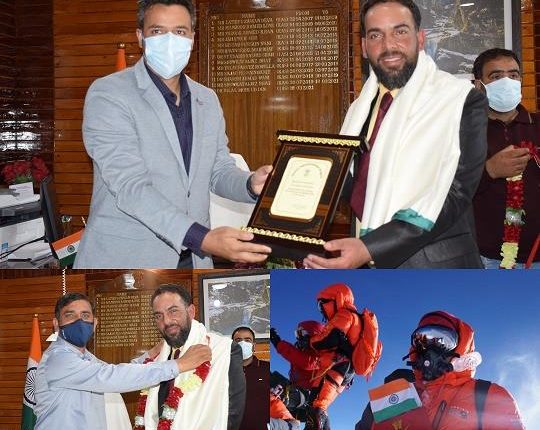 The Deputy Commissioner (DC) Kulgam, Dr.Bilal Mohi-Ud-Din Bhat congratulated Mehfooz for scaling the highest peak of the world and presented a shawl and a memento to Mehfooz during the felicitation event.

The DC said that it will go a long way in motivating other youngsters to take interest in mountaineering and other adventurous sports activities.

Mahfooz, a civilian instructor at the Jawahar Institute of Mountaineering and Winter Sports (JIM&WS) in Aru (Pahalgam), scaled the world’s highest peak and hails from Kujroo village of District Kulgam

While sharing details Mehfooz said that he belongs to a middle-class family from the Kujjar area of South Kashmir’s Kulgam district. and, “At 6.20 am on June 1, he completed his mission and scaled Mount Everest [8,849 metres], the highest peak in the world”.

The expedition was led by Colonel LS Thapa, an ace climber who has scaled Mount Everest twice. Colonel Thapa is currently Principal at JIMWS Pahalgam.

It was not a cake walk adventure and our team stuck for 10 days at camp 2, due to heavy winds in track to peak of Mount Everest,

Mehfooz said and added that “Youth of Kashmir should choose adventure sports as we have a lot of potential here for it.

Present on the occasion were ADC, ACD and other officers from District administration.

Vaccination for 18-44 age group in progress across district Shopian

India must regulate cryptocurrencies in consumer interest and to promote innovation:…

University of Southern California: The long road from USC architecture project to…

iednewsdesk Nov 30, 2021
When visitors go to Joshua Tree National Park, the idea is to be captivated by the natural beauty of the…

Kyushu University: Organics glow longer and stronger without depending…