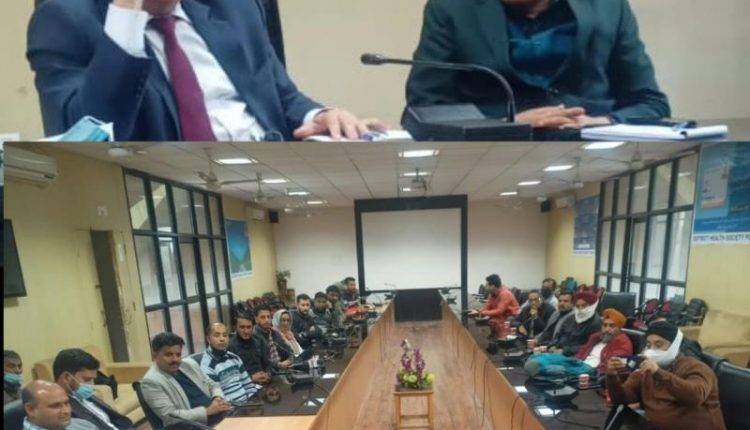 Rajouri: Amid rise in the number of COVID19 cases in the country, Deputy Commissioner Rajouri, Rajesh K Shavan today convened a meeting with the District Level Task Force to review the control measures.

During the meeting, the DC sought a detailed report from the concerned officer about the number of active cases in the district and the measures being put in place for the efficient containment and management of the pandemic in the district.

The Chief Medical Officer informed that there are 09 active cases in the district.

The Additional Deputy Commissioner Rajouri, Sher Singh threw light on the measures previously taken to mitigate the pandemic in the district.

The Deputy Commissioner said that there is a need to put serious efforts and to chalk out an effective strategy to combat it, if there is rise in the COVID19 cases in the District. He said that the steps taken for control and management of COVID-19 will be revived and asked the concerned officers to make all efforts possible in this regard.

The Deputy Commissioner asked for reactivating the COVID19 control room which would work 24/7 for dissemination of the COVID related information. Besides, he also directed for reactivating the Village Level Surveillance committees which would help in the identification of the active cases in the rural areas and ensure hundred per cent contact tracing.

The Deputy Commissioner also directed for strengthening the entry points of the district to lower the risk of COVID19 infection from the travellers entering the district.

The Chief Medical Officer was directed to collect one thousand samples per day and constitute ten teams for random sampling in the busy places.

The concerned officer from the Army was asked to ensure the collection of the samples of troops daily and submit the report in this regard. A sampling unit would be set up at the entrance of the DDC office complex for collecting the samples.

District Panchayat Officer and the District Information Officer were directed to generate massive awareness among the general public at the Panchayat level about the ways to be adopted to stay safe from the deadly Coronavirus.

Deputy Commissioner directed the Chief Education Officer to ensure the use of face masks by the teachers and students in all the schools and strict adherence to the COVID19 protocols. All the district and sectoral officers and their employees have been asked to wear masks and use sanitisers.

While reviewing the progress regarding the vaccination drive being carried out in the district, the Chief Medical Officer informed the chair about the progress achieved under the vaccination drive. She informed that 4891 health care workers have been administered the first dose, 2456 Health care workers have received the second dose and the cumulative achievement is 94 percent.

Similarly, the progress regarding the vaccination of the frontline workers and persons above sixty years is 85 per cent and 16.08 per cent respectively, besides as many as 95 persons in the district under the age group of 45-59 with Co-morbidity have also been vaccinated.

While giving details of the vaccination doses available in the district, the concerned officer informed that as many as 89780 doses had been received in the district out of which 49140 were handed over to the Army, 200 sent to Poonch and a balance of 40440 doses is available with the Health Department.

McGill University: $2.9 million from the Government of Canada for…