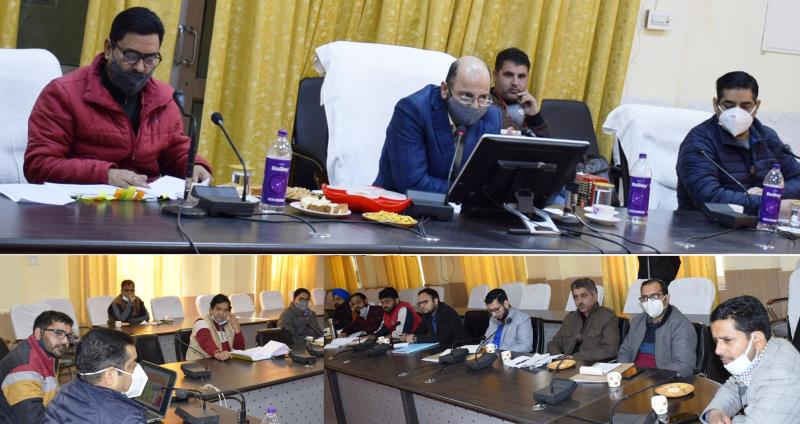 Ramban, January, 28: Deputy Commissioner Ramban, Mussarat Islam today asked the Rural Development Department functionaries to put in their sincere efforts to achieve the targets within the stipulated time frame.
He was reviewing the progress achieved in the implementation of flagship rural sector schemes, here at a meeting of the officers of Rural Development and Panchayati Raj Department.
Reviewing the schemes and activity-wise progress of the works being executed by the RDD, the DC asked the officers to redouble their efforts to ensure effective implementation of schemes meant for the socio-economic development of the rural masses.
The meeting was attended by Assistant Commissioner Development, Zameer Ahmed Rishu; DPO, Sunil Bhutyal, Executive Engineer, REW, BDOs and Engineers of the department.
The Deputy Commissioner set deadlines for achieving the target of completion of various works, MGNREGA payment, updation of dashboard, execution of Tribal Area Plan, Geo Tagging of Assets and clearance of delayed compensation.
The DC also directed the BDOs to complete approved works of different departments including Youth Services and Sports, Agriculture and Education taken up under convergence plan.
Earlier, the ACD, through a powerpoint presentation, informed that out of approved 4621 works under MG-NREGA, a total 3676 works of different nature have been taken up by the department. He also presented details of the progress made by the department under flagship schemes including MGNREGA, PMAY-G, SBM, 14th FC, FTO generation, completion of works taken up, sanctioning and geo-tagging of PMAY houses etc.
The DC directed the BDOs to ensure timely payment of wages in favour of the job card holders as also completion of targeted works on priority basis.