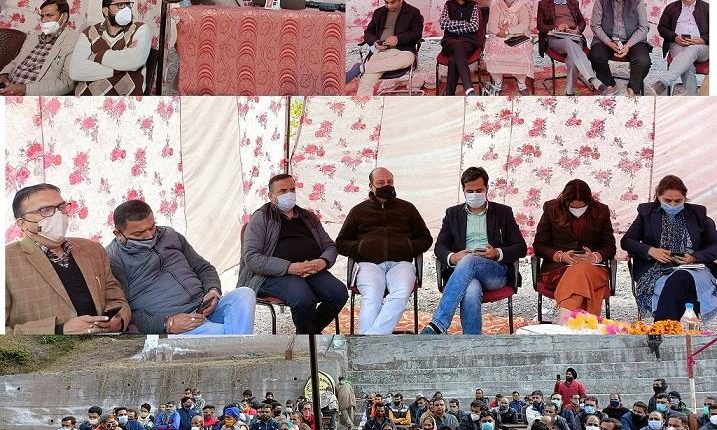 At the outset, Charandeep Singh interacted with the PRIs and locals, listened to their grievances and directed the concerned officers to ensure timely redress of genuine issues.

The PRIs, Public put forth their demands seeking the Ambulance at PHC Tote, replacement of old wooden poles, opening of Bank Branch, adequate Staff for High School Tote and Dagankote, compensation of acquired land, posting of Gynaecologist for PHC Tote, opening of Anganwadi centre at W.No. 03, posting of Gynaecologist and Medical staff for Devigarh subcentre, upgradation of Labour Cards, Middle School Devigarh to be upgraded as High School.

After listening to the Public grievances, Charandeep Singh addressed all the important issues one by one. He also motivated the public to avail the benefits of government schemes meant for them.

Scores of issues of Water, Power, Road, Transport, Ration, Nutrition, Education, Health were resolved on the spot after face to face deliberation with District Officers and for several other issues DDC fixed timeline for their resolution.

While reviewing the pace of development works, Charandeep Singh directed the concerned authorities to complete the projects in a stipulated time frame.

PRIs and locals appreciated and thanked DC for listening to their Grievances.

University of Göttingen: Genome Atlas to support the rescue of biodiversity in…